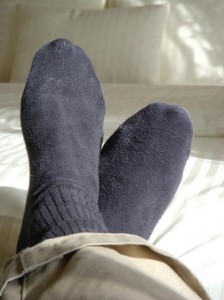 Natural Health News — Fabrics treated with antibacterial chemicals are leeching these toxic substances into the environment every time they are washed, according to Swedish scientists.

As reported earlier in the year on this site, the Swedish government has developed national plan for a toxin free everyday environment and this latest study is part of its commitment to understand how chemicals spread throughout the environment and what their effects on human health are.

Washing rapidly removed these chemicals in all the clothes. In the case of triclosan and trichlocarban more than half of the original content was washed out after 10 washes. With silver both the original concentration and washed-out content varied enormously but in many of the clothes, half of the silver had been washed after just 3 washes.

The scientists noted that although there is very little research to guide us about the direct health risks of wearing clothing impregnated with these substances, washing these chemicals into the environment does risk both human health and that of other living organisms and ecosystems.

Silver, for example, doesn’t degrade at all (and levels in the environment have been rising since it became a common fabric treatment). Trichlocarban and triclosan degrade very slowly.

Washed from our clothes these substances contaminate the sludge from treatment plants. The sludge is then spread on farmland as fertiliser, taken up by crops and eventually ends up in animal feed and food consumed by humans.

The authors of the study expressed concern about the increasing use of what are essentially pesticides in products we use every day.

Silver in ionic form, triclosan and trichlorcarban are, for instance, very toxic to aquatic organisms. Previous studies in 2008 and 2009 found that washing textiles treated with nanosilver released substantial amounts of the substance into waterways where it could potentially poison fish and other aquatic organisms.

There is evidence that nanosilver can cross the egg membranes and move into the fish embryos, causing malformations even death to small fish at various stages of development.

Triclosan, and its related compound trichlorcarban, is an hormone disruptor, that can affect male and female reproductive hormones and possibly fetal development, and also shown to alter thyroid function.

In the US the Centers for Disease Control and Prevention (CDC) also has found that triclosan is present in the urine of 75% of the US population, and that concentrations have increased by 42% since 2004.

In addition to the environmental aspects there is also concern for direct exposure of young children who might suck on biocide-treated clothes. Newborn babies already have more than 200 contaminants in their blood when they are born. These are substances have been transferred from their mothers, who, in turn, have been exposed through substances in their food and drink, the air they breathe and what is absorbed through the skin.

Most governments have been slow to deal with this threat.

In Europe according to the Environmental Code, the REACH chemicals legislation and the Product Safety Directive, manufacturers are responsible for ensuring that products they sell do not present risks to humans and the environment.

Under a new EU Biocidal Products Regulation, which comes into force in September 2013, it will no longer permitted to release biocidal products on the EU market unless the active ingredients are approved for the intended application.

For example, different silver compounds must be approved for use to protect against smell in textile fibres. This requirement will also apply to articles imported from countries outside the EU.

If a manufacturer makes an ‘antibacterial’ claim, the article will have to be labelled with the name of the active substance used and the effectiveness of the biocidal treatment will need to be documented.

In the US there is as yet no legislation to limit the use of these substances in commercial products. This in spite of the fact that scores of public health and advocacy groups, local state departments of health and the environment, as well as municipal and national wastewater treatment agencies submitted are calling for an end to triclosan in consumer products.

Earlier this year over 10,000 individuals contacted the Environmental Protection Agency (EPA), via email and docketed comments, in support of a petition to ban triclosan instigated by environmental  groups Beyond Pesticides and Food and Water Watch.

Even though they have become increasingly popular, with good hygiene, there is no real need for antibacterial textiles, which are used or things like sock, shoes, sports clothing and children’s clothes. What is more, because these chemicals wash out quickly there is a question mark over just how effective they are over the long-term.