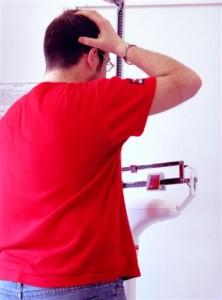 Scientists have found that BPA exposure can cause weight gain [Image: Morguefile]

Natural Health News — The way that environmental chemicals affect our health is one of our ‘soap box’ issues here at NYR Natural News.

Now Chinese researchers  have found that adults over the age of 40 with higher levels of bisphenol A (BPA) in their urine tend to be obese, have more abdominal fat and be insulin resistant.

These metabolic disorders can lead to further and more harmful health problems, such as high blood pressure, diabetes and heart disease.

BPA exposure is widespread – almost all people in the West carry it in their bodies – so the study’s results highlight a potentially significant health risk from exposure to the contaminant.

BPA is a high production volume (HPV) chemical used in the manufacture of polycarbonate plastics, in epoxy resin linings of food cans. It is also used in  some thermal receipt paper which, in turn, contaminates our paper money with BPA. The chemical can contaminate food and drink and enter the body through diet. BPA can also be absorbed through the skin or breathed in.

In the study, BPA levels were measured in the urine of 3,390 adults older than 40, in a single morning sample. The BPA levels were classified into groups by increasing concentration levels (from low to high), and the groups were compared. The levels found where well within those typically seen in the West.

The highest BPA levels were associated with both a BMI that indicated obesity (in this study, above 28) and abdominal obesity (i.e., a waist measurement of 35 inches in men and 33.5 inches in women) and higher concentrations of insulin in the blood. Overall, younger men in this study group tended to have the highest levels of this chemical in their urine.

Even in participants who were not overweight, the prevalence of insulin resistance was increased by 94%  in groups with the highest levels of this contaminant – an increase more prominent than in the obese BMI groups.

This study in limited by the fact that the relationship is based on a single sampling of BPA in the urine. However earlier studies published in the Journal of the American Medical Association and the journal PLoS One, have also shown links between BPA and metabolic disorders.

Laboratory-based studies have also found that BPA increase the nubmer of fat cells and  insulin hormone levels. These, in turn, can lead to hyperinsulinemia and insulin resistance and obesity.

The weight of the evidence suggests that BPA is a potentially significant threat to health – one that authorities are still refusing to deal with.

Scientists have found that BPA exposure can cause weight gain [Image: Morguefile]