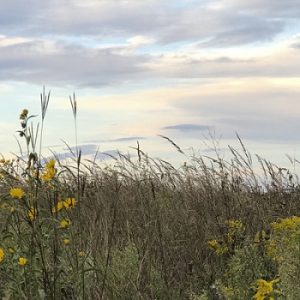 Plant diversity leads to more carbon stored in the soil

A new study confirms what most scientists already know, and what proponents of industrial agribusiness either don’t get, or won’t admit: Nature abhors a monoculture.

The study suggests that by restoring biodiversity, we can vastly enhance the soil’s potential to store carbon.

That’s good news for the climate. And there are co-benefits: healthier, more resilient soil and plants, not to mention wildlife habitats.

Scientists have long believed that soil aggregates—clusters of soil particles—were the principal locations for stable carbon storage. These clusters develop when tiny particles of soil clump together.

Mycorrhiza—the microscopic fungi which live in healthy soils—produce sticky compounds that help “glue” these clusters together helping to stabilize and protect the carbon particles inside them.

Now, a recent study out of the Michigan State University (MSU) Great Lakes Bioenergy Research Center, suggests that this soil clustering is most efficient when soil has a healthy “pore structure.” And the key to a healthy pore structure is plant biodiversity.

According to the report, soils from restored prairie ecosystems, with many different plant species, had many more pores of the right size for stable carbon storage than did a pure stand of switchgrass.

Soil pores are the spaces between soil clusters (soil without pores is basically rock!). The pores are formed by the movement of roots, fungi, worms and insects, and by expanding gases trapped within these spaces.

The amount of carbon that soil can hold depends on the type of soil—and soil type also affects porosity and carbon storage.

Clay-based soils, for instance, hold organic carbon for longer than sandy soils. The ins and outs of this “carbon budget” are also affected by regional climate, how often the soil is disturbed and even the levels of organic material, which in turn are influenced by  the health and diversity of in the soil.

Soil pores, large and small, form a connected network underground and are important because they are reservoirs for groundwater and for the oxygen that plants need to thrive.

But what the MSU scientists found was that they also provide the optimal micro-environment for accumulating carbon.

Over a period of nine years, the researchers studied five different cropping systems in a replicated field experiment in southwest Michigan. Of the five cropping systems, the two with the highest plant diversity had many more pores of the right size for stable carbon storage.

According to Alexandra Kravchenko, MSU professor in the Department of Plant, Soil and Microbial Sciences and lead researcher on the project:

“What we found in native prairie, probably because of all the interactions between the roots of diverse species, is that the entire soil matrix is covered with a network of pores. Thus, the distance between the locations where the carbon input occurs, and the mineral surfaces on which it can be protected is very short.”

That, he says, means that a lot of carbon is being stored in the prairie soil. In contrast he noted that in monoculture switchgrass the pore network was much weaker, so the microbial metabolites had a much longer way to travel to the protective mineral surfaces.

Monocultures of corn were even worse at storing carbon than the switchgrass.

The upshot is that while we tend to think the best way to put more carbon in soil is to have plants produce more biomass, either as roots or as residue left on the soil surface to decompose, a focus on plant diversity may be a more effective and elegant long-term solution.

That’s because soil is dynamic. In any field there are likely to be several different natural carbon cycles operating simultaneously at any one time.  Carbon in the soil is made up of different types of organic materials at differing stages of decomposition. In terms of carbon turnover and storage, these materials fall into three broad categories, or pools: “fast pools,” “slow pools” and “stable pools.”

For climate change mitigation slow and stable pools are key.

Some carbon, in the form of plant residues and the carbon secreted by plant roots, will only stay in the soil for a short time—weeks to years—before it is emitted back into the atmosphere as carbon dioxide. This fast pool is necessary, in part, because it provides an important source of energy for soil microorganisms.

The “slow pool,” where carbon can remain for years to decades, is made up of processed plant material, microbial residues leftover from the fast pool, and carbon molecules that are protected from microbes in soil clusters. This pool helps to maintain soil structure and the distribution of soil nutrients.

A third “stable pool” is made up of decomposed organic material—humus—as well as soil carbon that is well protected from microbes. It can be found below one meter deep and can retain carbon for centuries to millennia.

There is also a fourth “pool” of what’s known as recalcitrant organic carbon, made up of organic material that doesn’t decompose.

We can do better

We can’t rely on soil as our only means of climate change mitigation. Nor can we escape the fact that climate and soil are locked into a kind of push–me-pull-you battle. The more our climate changes, and the more heat and drought we experience, the more soil structure will be affected. making it harder for soil to sequester carbon.

Under these circumstances more soil carbon will enter the “fast pool” cycle releasing more CO2 into the atmosphere.

But we can keep learning about our soil and how it works, and use this knowledge to help make it much more efficient and impactful in terms of the carbon it can sequester. One way to do this is through careful and conscious land management.

A 2017 study estimated that with better management, global croplands have the potential to store an additional 1.85 gigatons carbon a year. That’s equal to the annual emission of the global transportation sector.

While the capacity of soil to store carbon isn’t infinite, some scientists believe our global soils could continue to sequester carbon at this rate for 20 to 40 years before becoming saturated. Plenty of time for us to get our collective act together on lowering global emissions.

Farmers can help soils reach their carbon storage potential by planting cover crops, practicing crop rotation, rotational grazing and agroforestry, minimising tillage and using green and animal manures. All of these things, which are key activities of organic and regenerative farmers, help slow down carbon turnover and encourage sequestration.

An added bonus is that carbon storage isn’t just something we do for the future. It directly benefits farmers today by improving soil fertility, reducing erosion and increasing resilience to droughts and floods.

Healthy soil also produces healthy plants—which means better nutrition for all of us.

Regenerative farmers know that healthy soil doesn’t just help us fight climate change. Improving biodiversity, soil structure and workability and the level of nutrients in our foods it will also help us adapt to and survive it—and that really is a future worth fighting for.