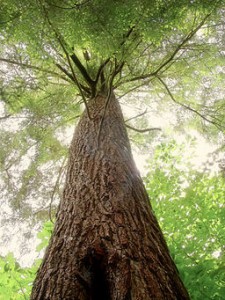 Essential oil vapours released by plants have a role in helping to keep the planet cool[Image: Nicholas A Tonelli - Wikipedia Commons]

It has long been suspected that the envelope of essential oil vapour around an aromatic plant helps protect it from extremes of temperature, especially heat.

It makes sense that higher temps lead to greater essential oil evaporation, and this in turn has a cooling effect on the plant (evaporation from a surface is always cooling). Until recently, no one imagined that there might be a cooling phenomenon taking place on a much larger scale.

There is always invisible water in the ambient air. There are also tiny particles floating in the air, such as salt and dust; these are called aerosols. The water vapour and aerosols are constantly bumping into each other. When the air is cooled, some of the water vapour sticks to the aerosols when they collide – this is condensation. Eventually, bigger water droplets form around the aerosol particles, and these clump together with other droplets, forming clouds. 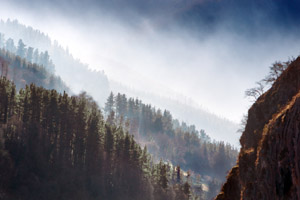 It now appears that the world would have warmed more than it has were it not for the aromatic cocktail of chemicals emitted by plants. It turns out that this can change the weather – and anything that changes the weather day after day and year after year changes the climate too. While this mechanism is nowhere near strong enough to save us from global warming, it may have been stronger in the past when the air was cleaner. So could it be that Gaia is not powerless after all? – Stephen Battersby, New Scientist, 2013

The Gaia hypothesis is James Lovelock’s idea that the planet as a whole is capable of environmental self-regulation (Lovelock & Margulis 1974).

In 1987, Lovelock and others proposed a feedback mechanism that could counterbalance global warming involving the oceans. Called the CLAW (after its authors) hypothesis, this proposed that algae in the sea emit a gas called dimethyl sulfoxide, which can react with air to form sulfuric acid vapour and condense into aerosols (Charleson et al 1987).

Warmer weather causes greater algal growth, and the aerosols could feasibly cool the planet by reflecting sun directly, and also indirectly by making clouds whiter. However, water droplets do not form and grow unless they are at least 100 nanometers in size, and models of the CLAW hypothesis later showed that particles would not reach even close to this size. In addition not enough dimethyl sulfoxide is released to make a difference.

In 2004, scientists at the University of Helsinki proposed an alternative model

involving pine trees instead of algae (Kulmala et al 2004). They hypothesized that increased temperatures and atmospheric CO2 would lead to increased photosynthesis and forest growth, leading to an increase in pine oil emissions. Pine oil is mostly composed of monoterpenes such as limonene and pinene.

These terpenes rise above the trees, and combine with sulphur dioxide and other aerosols to form especially large cloud droplets. Clouds with larger droplets are whiter, reflecting more sunlight back into space, cooling the land below, and thus counteracting the effects of global warming. (More trees also means more CO2 absorption, so there is a double benefit.)

Global warming offset
This hypothesis now looks like a reality – not so much in terms of increased forest growth, but warmer temperatures do result in greater pine oil emissions, which do cause whiter and larger clouds. A research team at Manchester University has demonstrated that, as aerosols and water accumulate, the presence of terpenes changes the chemistry of the drops, allowing them to attract more water, and this can substantially increase the  number of droplets (Topping et al 2013). A cloud with a greater concentration of droplets is a whiter, fluffier cloud.

The clincher comes from a study involving 11 weather stations around the planet. A team including Markku Kulmala and Paul Paasonen, also at Helsinki, sampled the air at these stations, counting the number of aerosols of 100 nanometeres or larger, and also the level of terpenes. They found a clear pattern (Paasonen et al 2013). The effect is strongest in places such as eastern Siberia and Finland, where the air is clean. “But in more polluted areas, the feedback is not significant” says Paasonen. 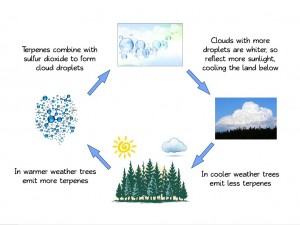 The extent of the effect is not known, but it may not be very big. It could offset global warming by as much as 10%, or it might be less than 1%. And, where there is significant atmospheric pollution, pine oil evaporation makes no difference.

But it’s one reason to preserve existing pine forests, and also applies to spruce, larch and similar species. Russia, Scandinavia and Canada take note. In theory, it will also apply to any large plantation of aromatic plants, but in reality pine forests may be the only significant contributor because of their mass.

Footnote
The terpenes are only able to contribute to cloud formation because, once in the atmosphere, they are oxidized by ozone and other gases into slightly larger particles, and this is an important step in the process. So more ozone could also lead to whiter, larger clouds, again supporting the Gaia hypothesis.

This is somewhat ironic because high ozone at ground level also oxidizes these terpenes, which of course come from essential oils too, and inhaling the resulting oxidation products can cause respiratory problems. So what is good for the planet above tree level is not so good for people with respiratory problems below. Fortunately, this only happens where there are high ozone levels.

Lovelock JE, Margulis L, 1974 Atmospheric homeostasis by and for the biosphere: the Gaia hypothesis. Tellus Series A 26: 2–10 http://www.gps.caltech.edu/classes/ge148c/pdf%20files/lovelock.pdf

Essential oil vapours released by plants have a role in helping to keep the planet cool[Image: Nicholas A Tonelli - Wikipedia Commons]