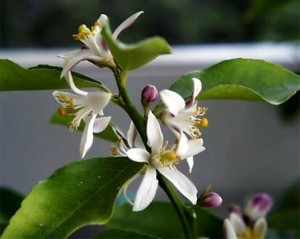 Neroli – keep calm and carry on

The blossom of the bitter, or Seville orange tree, Citrus aurantium amara, is the source of a powerfully calming, refreshing and uplifting essential oil that is has long been considered a treatment for anxiety and nervous tension.

The tree is native to China, but has been cultivated for hundreds of years in the countries bordering the Mediterranean. Traditionally we make marmalade from its bitter fruit and distil a precious oil, neroli, from its flowers. The name ‘neroli’ is reputed to come from a seventeenth century Princess Anna-Marie de Tremoille, of Nerola, who wore orange blossom oil as a kind of signature scent on her body and clothes.

Neroli certainly has the complexity to be worn as a scent in its own right – a trait it shares with both rose and jasmine.

It is an exquisite, creamy floral aroma, with citrus and green notes and a dark, rich, almost bitter mossy undertone. It is intense yet light and refreshing and is a component of classic Eau de Cologne.

Powerfully calming, refreshing and uplifting, neroli oil is known as the ‘Rescue Remedy’ of the essential oils. Aromatherapists recommend it as a first choice in cases of acute shock and fear, and also for chronic stress, tension and adrenal exhaustion. It is particularly indicated where stress impacts the heart and digestion.

The blossoms are delicate and the best quality oil is water, rather than steam distilled, from the hand-picked flowers, and from trees which are at least 4, and generally over 10, years old.

The just mature flowers must be picked early on a sunny day, and without any leaflets or calyx. Failure to observe these criteria with an entirely different scent, closer to that of petitgrain (an essential oil distilled from the leaves and green twigs of the same plant).

The way we perceive scent can be highly individual. Something that smells good to one person may well not smell so good to another. Interestingly how a person perceives the scent of neroli has some impact on its therapeutic effect.

Either way it seems to have the power to balance, to revive and to help release stress.

Studies using only neroli are thin on the ground; often it is tested as part of a blend or its sedative powers are tested alongside other well know sedative oils such as lavender.

Nevertheless, studies attest to its stress-busting effects in both animals such as gerbils and mice  as well as humans. For example, in one study 90 women neroli, in combination with other oils, was found to produce a positive outlook and reduce symptoms of stress.

Not all studies have found this benefit; people waiting in an emergency room did not respond to neroli – but as the authors suggest, “Although no difference was detected for the aromatherapy group, this could be because of environmental conditions or imprecise application of the aromatherapy”.

However, a review of 18 studies on the physiological effects of aromatherapy agents, such as neroli, concluded that scent does influence mood and behaviour.

It is also considered antiseptic and antibacterial. This is likely due to the presence of constituents such as camphene, linalool, limonene and alpha pinene.

Animal studies show this effect. But these constituents may also explain why a small study in 2004 found it was one of the essential oils found to be effective in helping to heal perineal trauma after birth.

Neroli essential oil is used internally in folk medicine to relieve gastrointestinal complaints. The oil is also used in traditional Chinese medicine to treat vomiting and anorexia. In addition, the oil is approved for use for a variety of conditions by the German Commission E, which produces monographs as guidelines for the administration of herbal medicines.

Using the oil in this way is not common these days, though extracts of the bitter orange fruit and peel are common ingredients in remedies that address high blood pressure and weight loss. Other evidence suggests an antiviral effect and also an antidepressant effect of constituents of bitter orange.

Orange flower water is a by-product of the distillation of neroli oil and can be used both internally and externally.

Orange flower water is believed to have similar uplifting effects as neroli oil and is also used in cooking. It’s characteristic in the cooking of North Africa and other Mediterranean countries, and adds an extra depth of flavour to deserts and fruit salads.

For the skin, neroli is used to treat imbalance of moisture levels – and is considered an excellent regenerative treatment for dry skin. Mixed in an oil based elixir or cream it can be used to treats fine lines caused by dehydration. Neroli oil has a gentle toning action and can be used, even on delicate skin.

Its antioxidant and anti-inflammatory properties mean it is often included in products that fight premature skin ageing.

Neroli’s antiseptic properties make it a good choice for acne prone skin. Even if it seems counter intuitive you can make a simple moisturiser by adding 3 drops of neroli oil per tablespoon to a base oil such as jojoba oil. Applied to the skin it makes an excellent skin conditioner. Or simply try using a quality orange flower water as a daily toner.