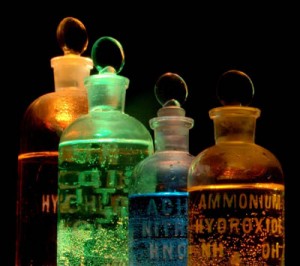 Unacceptable Levels – the chemical burden on our bodies

Sometimes stories begin with a tragedy.  Unfortunately that’s how I became acquainted with the issue of chemicals in our world, through a very personal loss.

My wife Lauren and I were thrilled when we had first learned that she was pregnant.  At thirty years old, I really felt like I was finally ready for the responsibility, and that my life was finally going to be complete.

I remember it clearly, as it had been an Easter Sunday when I had told my entire family about the great news.  Four days later it was all over.  My wife had a miscarriage, and all of the great expectations, hopes and dreams about a new day had been dashed.

Even though it was tough to get over it, we did manage to try again and she was able to keep the baby for the full term and our son, Brayden had been born in February 2008.  So, after all of the anxious feelings and words from doctors and specialists about our situation, it seemed like it was going to be smooth sailing for the rest of the way.

Our first had been such a wonderful addition to our family that we decided to try for our second child. Unfortunately, the third pregnancy turned out the same way the first one did, and that is when I got angry.why was this happening?  My wife wanted answers just as badly as I did, and she was the one who set me on a journey of discovery.

Almost two weeks after her second miscarriage, I had been cleaning up outside of our house, when she lifted up the window and asked me if I knew what was in her acne medication.

Of course, I had absolutely no idea whatsoever, so I quickly replied, “No”.

This was the first time in her life that she looked at label of ingredients on the side of a product that wasn’t food, and she started to look at everything that was in it.  I remember she was having trouble pronouncing some of the chemicals, as many of those she had not ever encountered before.

She found that some of the ingredients had been linked to cancer, or were endocrine disruptors, or could cause organ toxicity or could just cause cellular level changes.

We both sat back and thought to ourselves: “How in the world could we be able to buy something like this?  I thought someone was out there making sure that this kind of thing didn’t happen?  How many other products are like that just in our bathroom?”

So, we started looking all over our house at everything.  From our bedroom to the bathrooms, our kitchen, our clothing, our vehicles, we didn’t want to leave a stone unturned.  We needed to know as much as possible about this, and we had discovered one thing that almost all of the chemicals we were encountering had in common.

From our government in the US, to our companies and our court system, no one really knows the health ramifications of all of these chemicals.  One at a time they may not be a particular problem, but anyone who has taken a elementary school class in chemistry knows that when some chemicals are combined, they can cause adverse reactions.

And the worst part is that many of the 88,000 chemicals that are in our system of commerce today are not regulated at all.

That is when I had decided that enough was enough, and I hit the road with a camera and decided to speak with the top people in the world about this issue.

Even though I didn’t know everything about this subject, I knew that if I could learn as much as I could from them, I would be able to help my family and other people in a big way through education.

I needed a plan, and it all started, ironically, at The Rodale Institute, which is located in Kutztown, Pennsylvania, which is about 70 miles from where I currently live.  Once there I knew that I was on to something, as I was told that this is a huge issue that people really aren’t aware of, and that no one is really talking about.

Incidentally, The Rodale Institute is the very first institution in the United States that served as a teaching school for farmers to grow crops organically, which had been viewed as counter-productive decades ago when chemical agriculture was becoming more prominent.

Today, I believe that an institution such as The Rodale Institute has proven that it was and always has been futuristic in it’s approach, as we are seeing the damaging results of conventional agriculture daily.

I had the opportunity to travel the world, to see a lot of different things and to meet with and film some of the top experts in the world on this issue.

From Ralph Nader (longtime consumer advocate and US Presidential Candidate), Dr. Devra Davis (who helped frame the Toxic Substances contorl Act in the US), Ken Cook (president and co-founder of the Environmental Working Group), Stacy Malkan (co-founder of The Campaign for Safe Cosmetics), Dr. Richard Clapp (epidemiologist and public health expert at Boston University) and Dr. Tyrone Hayes  (a biologist and pesticide expert at the University of California, Berkeley), along with 75 other interviewees, it took a great deal of work to get this project completed.

In my travels, I had the chance to see a lot of the world, as I went to Hawaii, Canada and even the UK and the journey has helped form the perspective that I now carry.

So much more we need to know

As I conducted all of my interviews, many of those I had spoken with were well versed in their own perspective and discipline.  However, by talking and trading information in conversations with many of them off camera, I found I was educating them as much as they were educating me.

This is a complex subject and whether it was pesticides, flame retardants, vaccines, BHA/BHT, food colourings, fluoride, toxic sludge or chlorine, even the most well educated on the issues still had further to go themselves, which I found to be fascinating.

That is why this film is so important, because no matter how much any of us think we know about an issue as big and as complex as this is, there are still aspects of it that need to be considered, and that’s exactly what my movie, Unacceptable Levels, provides.  At heart it’s a simple view by a father, about an extremely complex problem that affects every single life form on this planet, and the real issue is that it happens slowly, and quietly over a long period of time.

I believe that the message is not just about sustainable change, but one of sustaining the changes that we want to see in this world.  That’s going to require a sustained movement of people like you and me.

Or as Dr Seuss says in his seminal book The Lorax:

“Unless someone like you cares a whole awful lot.  Nothing is going to get better.  It’s not”