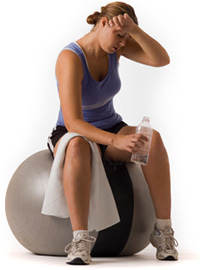 Yes, you can exercise too much! Researchers find little benefit beyond four gym sessions a week

Daily workouts may not yield the expected health results

Natural Health News — How many time a week do you need to work out to keep healthy?

It may seem incredible that you could work out too much, or expend a lot of energy working out to very little benefit, but that is just what a new study is suggesting.

The researchers looked at different exercise patterns taken up by formerly sedentary women over a four month period. They found that the gains in fitness were nearly identical among study groups who worked out two, four, or six days a week.

More interesting, however, was that women who worked out four times a week expended much more energy than the other two groups, suggesting that this frequency could be the “sweet spot” for combined fitness and weight loss.

In each group, exercise intensity was gradually increased over the course of the study. One group lifted weights once a week and jogged or rode a bike one day per week; the second group lifted weights twice weekly and jogged or rode an exercise bike twice per week; and the third group completed three weekly sessions each of weight and endurance training.

Although it seems counter intuitive, the women who worked out six times a week actually were expending 200 fewer calories per day at the end of the study than they had been at the outset. In contrast, the twice-weekly group was expending an average of 100 calories more per day, and the four-times-weekly workout group was burning 225 more calories per day.

According to University of Alabama at Birmingham professor Gary Hunter, who led the research it’s possible that the women in the twice-a-week and four-times-a-week groups “felt more energised and physically capable”, over time. Anecdotally, some of these women began working better fitness choices into their daily routine, such as taking the stairs rather than an escalator.

By contrast, the women in the highest-intensity workout group “complained to us that working out six times a week took too much time,” perhaps leading them to choose expedience over healthy choices in other aspects of their lives, says Hunter.

The findings were published in the journal Exercise & Science in Sports & Medicine.

Yes, you can exercise too much! Researchers find little benefit beyond four gym sessions a week