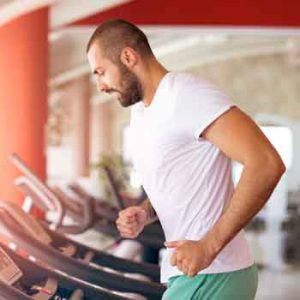 Skip eating before you exercise to get the most health benefits from your workout. [Photo: Bigstock]

Should you eat before exercising?

Exercise enthusiasts often wonder whether it’s better to eat or fast before a workout.

A new study is the first of its kind to show the effects of eating versus fasting on genetic activity in adipose (fat) tissue in response to exercise. This study highlights the different roles fat plays in powering and responding to exercise.

To find out more researchers from the University of Bath in the UK studied the body’s response in a group of overweight males.

The men walked for 60 minutes at 60% maximum oxygen consumption on an empty stomach and, on another occasion, two hours after consuming a high-calorie carbohydrate-rich breakfast. The research team took multiple blood samples after eating or fasting and after exercising. The researchers also collected adipose tissue samples immediately before and one hour after walking.

The activity of two genes in the fatty tissue – PDK4 and HSL – was different according to whether the men had fasted or feasted. If the men were exercising on an empty stomach it increased, but when the men exercised after a full breakfast it decreased.

The rise in PDK4 likely indicates that stored fat was used to fuel metabolism during exercise instead of carbohydrates from the recent meal. HSL typically increases when adipose tissue uses stored energy to support increased activity, such as during exercise, explained Dylan Thompson, one of the authors of the study.

These results reinforce the view that “adipose tissue often faces competing challenges,” Thompson wrote. After eating, fatty tissue “is busy responding to the meal and a bout of exercise at this time will not stimulate the same [beneficial] changes in adipose tissue.”

The upshot is that exercise in a fasted state might provoke more favourable changes in fatty tissue which, in turn, could bring more benefits for health over the long term.

Skip eating before you exercise to get the most health benefits from your workout. [Photo: Bigstock]