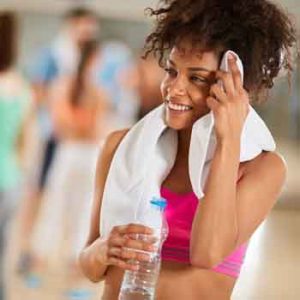 For a long time, adipose tissue (body fat) was thought of as just s form of stored energy. However, fat cells are now understood to be active cells that produce more than 400 adipokines (hormones) which eventually end up in the blood and make their way around the body.

Professor Michael Connor and his team at York University, Toronto, set out to determine whether the hormones found in body fat can account for the observed association between obesity and breast cancer.

» A team of researchers have found that the kind of hormones produced by fat cells – e.g. adiponectin and leptin – can either slow or speed up cancer growth and that levels of these hormones are modifiable through measures other than drugs.

» Using an animal model they found that rigorous exercise counteract, and even  prevent the effects on breast cancer growth that are caused by obesity.

Using a rodent model, Connor and his team looked at whether the fat cells play a role in the link between obesity and breast cancer, and whether interventions targeted at obesity counteract any of the life-threatening effects of breast cancer.

The research published in the Journal of Applied Physiology looked at both the effects of a high fat diet, which raised the risk of breast cancer developing, and exercise. Results suggest that exercise – which has none of the harmful side-effects of many cancer drugs – could be a potentially beneficial therapy in some breast cancer patients.

“Our study shows that voluntary and rigorous exercise can counteract, and even completely prevent the effects on cancer growth that are caused by obesity. We also show that even moderate exercise can lead to slowing of breast cancer growth and that the more exercise you do, the greater the benefit.” said Connor.

For nearly a half century, researchers have studied the links between obesity and breast cancer. This recent study has revealed specifically that adiponectin and leptin are possible reasons for poorer response to therapy and higher risk of death in obese persons than in others.

Although it needs to be replicated in humans, the study opens the door for new possibilities in tackling breast cancer. Connor suggests that breast cancer patients who exercise may require less of the toxic treatment now used to fight the disease. He also thinks the results suggest that exercise could be a way to prevent breast cancer in those who are at risk of developing it.