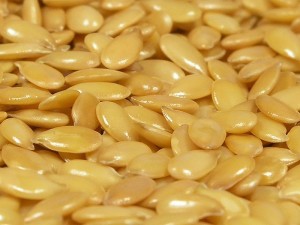 A diet high in seeds, particularly flax seeds, may help slow, or even prevent, the development breast cancer as you age.

That is a conclusion of a recent study by researchers at the German Cancer Research Centre (DKFZ).

The researchers examined blood samples from more than 1000 women who had been diagnosed with post-menopausal breast cancer over a three-year period. They were looking for a type of protective plant hormone (know as a lignan) called enterolactone.

This study published in the Journal of Clinical Oncology shows that in women with non-hormone dependant cancer the right dietary components are significantly influential in slowing the disease and reducing the risk of dying from it.

The researchers went on to suggest that the protective effect of flax seeds may come from something beyond its hormone-like effects, though more study is needed to confirm this.

Scientists still debate over the benefits of phytoestrogens, such as lignans and isoflavones (found in soybeans) for cancer prevention, because of the potential for hormone-like compounds to accelerate the growth of hormone-dependent malignant tumours.

For this reason the researchers said they did not recommend taking supplements, but instead encouraged women to  make sure their diets are rich in wholemeal products, seeds and vegetables – the sum total of which should provide all the beneficial phytoestrogens we need to stay healthy.

Earlier in the year the same research team identified a list lifestyle factors which significantly  influence a woman’s risk of getting breast cancer.  They note that things like family history of cancer, or starting menstruation at an early age are factors none of us can modify, these account for only around 37% of breast cancer cases. However factors such as taking hormone replacement therapy and lack of physical activity – things which women do have control over – account for between 30-37% of cases.