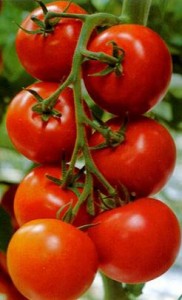 Tomatoes may provide more protection against breast cancer than soya

Breast cancer risk rises in postmenopausal women as their body mass index climbs. However the current study found that eating a diet high in tomatoes had a positive effect on the level of hormones that play a role in regulating fat and sugar metabolism.

The longitudinal ‘cross-over’ study examined the effects of both tomato-rich and soya-rich diets in a group of 70 postmenopausal women. For 10 weeks, the women ate tomato products containing at least 25 milligrams of lycopene daily.

Over a separate 10-week period, the participants consumed at least 40 grams of soya protein daily. Before each test period began, the women were instructed to abstain from eating both tomato and soya products for two weeks.

When they followed the tomato-rich diet, participants’ levels of adiponectin – a hormone involved in regulating blood sugar and fat levels – climbed 9%. The effect was slightly stronger in women who had a lower body mass index.

“The findings demonstrate the importance of obesity prevention,” Llanos said. “Consuming a diet rich in tomatoes had a larger impact on hormone levels in women who maintained a healthy weight.”

The soya diet was linked to a reduction in the women’s adiponectin levels.

Researchers have long theorised that a diet containing large amounts of soya could be part of the reason that Asian women have lower rates of breast cancer than women in the West.  But given these findings the researchers suggest that any beneficial effect could be limited to certain ethnic groups.

“The advantages of eating plenty of tomatoes and tomato-based products, even for a short period, were clearly evident in our findings,” said lead author, Adana Llanos, PhD, MPH, who is an Assistant Professor of Epidemiology at Rutgers University.

“Based on this data, we believe regular consumption of at least the daily recommended servings of fruits and vegetables would promote breast cancer prevention in an at-risk population” she added.

The study findings were released ahead of publication in the Journal of Clinical Endocrinology & Metabolism.

Tomatoes may provide more protection against breast cancer than soya