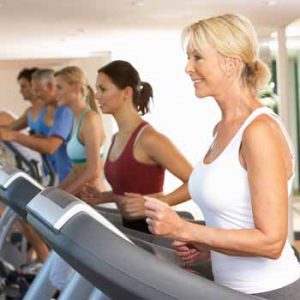 Keeping fit through middle age and beyond could help keep your mind sharp. [Photo: Bigstock]

Being a couch potato could shrink your brain

Natural Health News — Poor physical fitness in middle age may be linked to a smaller brain size as you get older, according to new research.

Smaller brain size may be associated with dementia.

For the observational study, published in the journal Neurology, 1,583 people enrolled in the Framingham Heart Study, with an average age of 40 and without dementia or heart disease, took a treadmill test.

They took another one two decades later, along with MRI brain scans allowing researchers to compare levels of physical fitness and brain volume over the 20 year period.

» Maintaining bran health in an ageing population is now a big concern for doctors and patients.

» New evidence suggests that maintaining physical fitness into middle age and beyond may hold the key.

» The study found people with good fitness levels in their 40s had larger brains than their unfit peers when measured 20 years later.

The researchers also did a separate analysis where they excluded those who developed heart disease or started taking beta blockers to control blood pressure or heart problems during the 20 year gap; this group had 1,094 people in it.

The participants had an average estimated exercise capacity of 39 mL/kg/min, which is an expression of the maximum amount of oxygen the body is capable of using in one minute.

Exercise capacity was estimated using the length of time participants were able to exercise on the treadmill before their heart rate reached a certain level.

People who had a 20% lower exercise capacity than the average also had a smaller brain volume two decades later – a reduction in brain size equivalent to two years of accelerated brain aging.

When the people with heart disease or those taking beta blockers were excluded, those who were 20% less fit than average saw reductions of brain volume equal to one year of accelerated brain aging.

The study also showed that people whose blood pressure and heart rate went up at a higher rate during exercise also were more likely to have smaller brain volumes two decades later.  Spartano said that people with poor physical fitness often have higher blood pressure and heart rate responses to low levels of exercise compared to people with better fitness.

The full implications of smaller brain size are not known but Spartano noted that “While not yet studied on a large scale, these results suggest that fitness in middle age may be particularly important for the many millions of people around the world who already have evidence of heart disease.”

Keeping fit through middle age and beyond could help keep your mind sharp. [Photo: Bigstock]