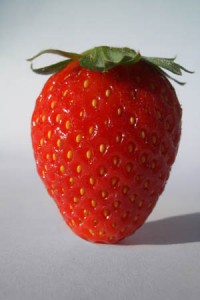 Organic strawberries - better for the birds and the bees and you and me!

The study,published in the journal PLoS ONE was led by Georg Andersson of Lund University in Sweden.

They also determined that this effect was apparent within two to four years of the conversion, suggesting that there is not a significant lag time before pollination benefits are seen after adopting organic farming practices.

The study is based on studies of strawberry plants on twelve farms in the county of Skåne, Sweden. On the farms with ‘KRAV’ organic certification, where neither pesticides nor non-organic fertiliser are used, 45% of the strawberry flowers were fully pollinated. On the conventional farms, the corresponding figure was 17%.

The results, say Dr Andersson, “suggest that organic farming could enhance the pollination service in agricultural landscapes, which is important for developing a sustainable agriculture. The method made it possible to measure the pollination independent of landscape composition, soil-type and other factors that can affect pollination success”.

Organic strawberries - better for the birds and the bees and you and me!