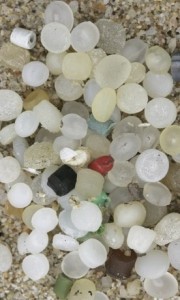 Natural Health News — If you choose sea salt over regular table salt because it contains extra health supporting nutrients, there’s some bad news for you about what else it might contain.

These tiny particles of plastic come from a variety of sources, including industrial waste, personal care products and plastic litter that degrades in the environment.

» Microplastics – ingredients in cosmetics and household products – get washed down the drain and are now ubiquitous pollutants in our oceans.

» They can be eaten by sea creatures and are known to have detrimental effects on their health due to the way they absorb pollutants from ocean waters.

» Now Chinese researchers have shown that humans may also be consuming worrying levels of microplastics via sea salt and shellfish.

We find them in bodies of water around the world, we know that they are accumulating in our oceans and the creature that live in them. But this new study in the journal Environmental Science & Technology shows for the first time how easily they can get in to the human food chain, and into humans.

The researchers from East China Normal University in Shanghai tested 15 brands of sea salts, lake salts, and rock and well salts from underground deposits purchased at Chinese supermarkets. What they found was:

The researchers began with the hypothesis that sea salts, which are evaporated directly from sea water, might contain microplastics.

They hadn’t suspected, however, that rock salt which comes from underground deposits, would have any. It has been suggested that this contamination did not come from the environment, but likely occurred when the salt was mined, milled or packaged

The Chinese team estimate that if adults were to consume sea salt at the recommended nutritional level (6g per day) for the seasoning, they could potentially ingest 1,000 microplastic particles every year from that source alone.

Some lab tests have shown nano-sized plastic fragments can enter cells and cause tissue damage. Another possible risk from eating microplastics may not be due to the plastic itself. Plastics act like a sponge for many toxic chemicals such as dioxins, polychlorinated biphenyls (PCBs), and dichlorodiphenyltrichloroethane.

More research is needed to understand the full impact of eating microplastics. While the researchers suggest the amount we may consume is small, this hardly matters given hormone disrupting chemicals that microplastics can contain. With hormone disrupting chemicals the dose does not make the poison and small amounts can have major effects on health.

Besides, would knowing consume plastic?