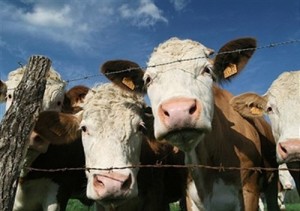 The world is running out of water but, say researchers, cutting back on meat may be one way to help conserve more for future generations

Natural Health News — There’s no escaping the link between how we farm and how we eat and environmental degradation. Now researchers have found that eating less meat would protect water resources in dry areas around the world.

Eating less meat is an emotive subject – but studies show that, in addition to it’s environmental impact, in the developed world at least, most of us are eating twice as much meat as we need to remain healthy.

Reducing the use of animal products can have a considerable impact on areas suffering scarce water resources, as meat production requires more water than other agricultural products, say researchers at Aalto University, in Finland.

“Diet change together with other actions, such as reduction of food losses and waste, may tackle the future challenges of food security,” states researcher Mika Jalava from Aalto University.

Growing population and climate change are likely to increase the pressure on already limited water resources and diet change has been suggested as one of the measures contributing to adequate food security for growing population.

The researchers assessed the impact of diet change on global water resources over four scenarios, where the meat consumption was gradually reduced while diet recommendations in terms of energy supply, proteins and fat were followed.

The study published in Environmental Research Letters is the first global-scale analysis with a focus on changes in national diets and their impact on the blue and green water use of food consumption.

Global population is expected to exceed 9 billion by 2050, adding over 2 billion mouths to be fed to the current population, according to the UN. By reducing the animal product contribution in the diet, global green water (rainwater) consumption decreases up to 21 % while for blue water (irrigation water) the reductions would be up to 14%.

Making a change to a lower meat diet, say the researchers, could secure adequate food supply for an additional 1.8 billion people without increasing the use of water resources.

The potential savings are, however, distributed unevenly, and even more important, their potential alleviation on water scarcity varies widely from country to country.

The researchers at Aalto University found substantial regional differences in diet change potential to reduce water use. In Latin America, Europe, Central and Eastern Asia, and Sub-Saharan Africa, diet change reduces mainly green water use. In Finland, for example, turning into a meat free diet would decrease the daily green water use of a Finn over 530 litres but at the same time resulting nearly 50 litres increase in blue water use.

Green water is the precipitation on land that does not run off or recharge the groundwater but is stored in the soil or temporarily stays on top of the soil or vegetation. Eventually, this part of precipitation evaporates or transpires through plants. Green water can be made productive for crop growth (although not all green water can be taken up by crops, because there will always be evaporation from the soil and because not all periods of the year or areas are suitable for crop growth).

In the Middle East region, North America, Australia and Oceania, also blue water use would decrease considerably. Blue water  is fresh surface and groundwater, in other words, the water in freshwater lakes, rivers and aquifers.

In South and Southeast Asia, on the other hand, diet change does not result in savings in water use, as in these regions the diet is already largely based on a minimal amount of products.

The world is running out of water but, say researchers, cutting back on meat may be one way to help conserve more for future generations