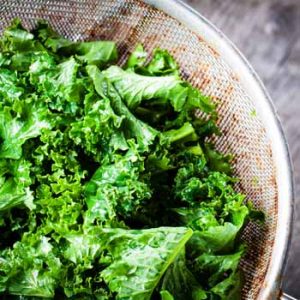 One serving or more per month of either kale or collard greens was all it took to significantly lower the risk of glaucoma. [Photo: Bigstock]

Natural Health News — A diet rich in green, leafy vegetables could significantly reduce the risk of glaucoma, according to new research.

Glaucoma, characterised by an increase in eye pressure and a gradual loss of vision, is a leading cause of blindness. It is hard to treat and even if treatment is received, 10% of those with the condition will eventually lose their sight.

This most recent investigation shows that an increase in dietary nitrates, the richest source of which is green leafy vegetables, significantly reduces the risk of primary open-angle glaucoma (POAG), the most common form of the disease.

» Glaucoma is the number one cause of blindness in adults. It can be hard to diagnose early and there is no cure.

» It is caused in part by poor circualtion to the eye, and in particular the optic nerve, which in turn increases pressure behind the eye. This circulation is regulated by nitrous oxdide (NO).

» US researchers have found that a diet rich in naturally occuring nitrates – such as those found in leafy green vegetables – can supply the body with the NO it needs to maintain good eye health.

Increasing circulation to the eye

Researchers from Brigham & Women’s Hospital and Harvard Medical School in Boston looked at historical data from two large studies: the Nurses’ Health Study and the Health Professionals Follow-up Study which together included around 105,000 women and men over the age of 40 and had no history of POAG.

With POAG, impaired circulation to the eye and in particular the optic nerve is an important cause.

POAG is caused by a clogging of the eye’s drainage canals that slowly increases the pressure within the eye.

Nitrous oxide (NO) helps regulate that circulation, as it does throughout the body.

Naturally occurring nitrates in food – not to be confused with those added to foods as preservatives which are not so healthy – are converted to NO and have been shown to be beneficial for blood circulation and lowering hypertension.

Thus the researchers were interested to find out if this would have a beneficial effect on glaucoma risk.

Every 2 years, the group’s diets were assessed for their green vegetable intake, and their nitrate intake was calculated. The participants were split into five groups accordingly; the highest group consumed roughly 240 mg of nitrate per day and the lowest approximately 80 mg per day.

The group consuming the most nitrogen had a 20-30% lower risk of POAG.

The results were even more substantial for a sub-type of POAG that is associated with a dysfunction in blood flow autoregulation, known as POAG with early paracentral visual field loss. For this disease, nitrate-rich diets lowered the risk by 40-50%.

Dietary nitrates are thought to help keep oxygen levels high in the blood and consequently reduce the thickness of the blood, lowering blood pressure and preventing potentially dangerous clotting.

Although there are numerous nitrate-rich vegetables to choose from, in the current study, only two vegetables were robustly associated with a lower glaucoma risk: kale and collard greens. One serving or more per month of either was all it took to significantly lower the risk of POAG.

If you’d like to increase your intake of nitrate rich vegetables some good sources include:

One serving or more per month of either kale or collard greens was all it took to significantly lower the risk of glaucoma. [Photo: Bigstock]