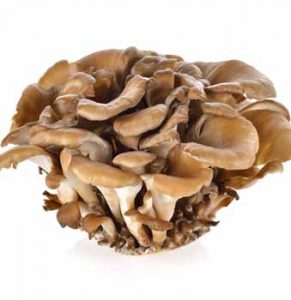 Maitake mushrooms are one of several mushroom varieties that act as 'functional foods'. [Photo: Bigstock]

Natural Health News — Bio-active compounds found in the maitake mushroom could help delay or prevent the onset of neurological conditions such as depression, a new study has concluded.

Mushrooms are widely considered functional foods and it is well-documented that the polysaccharides found in many mushrooms have effective antioxidant, immunomodulating and antimicrobial qualities, unique from those found in plants.

In addition, some researchers believe that the anti-inflammatory properties of some mushrooms could protect the brain and help halt or slow the onset of other disorders such as Alzheimer’s disease and dementia.

But compared with other more widely-studied plants and herbs, research into neurological health benefits of mushrooms is still at a very early stage.

» Several different types of mushroom have been shown to have a variety of medicinal effects.

» In a new study from China, the maitake mushroom (Griflola frondosa) was shown to have an antidepressant effect at several different doses.

» Although an animal study, the scientists believe that the results show the potential for the maitake mushroom as a functional food treatment for depression.

A new paper, published in the journal Pharmaceutical Biology, however, suggests that the potency of certain polysaccharides contained within the maitake mushroom (Griflola frondosa) could have beneficial brain effects.

Researchers from Yunnan University in China fed mice foods containing either maitake or oyster mushroom (Pleurotus ostreatus) for either one day or five days.

In addition, the animals were randomly fed either a low dose, a medium dose or a high dose of maitake-containing food.

A series of behavioural tests were conducted to further assess the potential antidepressant effects of the mushroom. Those consuming maitake-containing foods at any ‘dose’ performed better on these tests.

According to the scientists, this is not the first time maitake has been investigated for its medicinal properties, though most studies have been in animals.

Although the effects found in the current study have not been shown in people, from their data, the scientists, suggest that maitake is “a safe and edible mushroom, but may have fewer side effects than the currently used antidepressants,”

While patients could potentially just eat maitake as a food supplement to help treat depression, this discovery of an anti-depressant effect of maitake, they say, also opens the door for the development of effective and safe drugs for the symptoms of major depressive disorder.”

Maitake mushrooms are one of several mushroom varieties that act as 'functional foods'. [Photo: Bigstock]