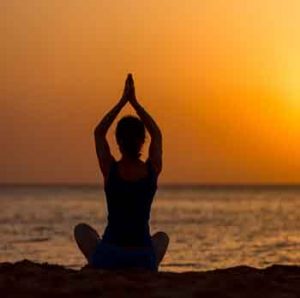 Antidepressant medication is considered a primary conventional treatment for major depression. But studies shows that drugs are ineffective in more than half of the people who take them. That leaves practitioners – and patients – with a problem, especially since those who don’t fully respond to antidepressants are especially at risk of relapse.

In a new pilot study, published in the Journal of Clinical Psychiatry, the practice of Sudarshan Kriya yoga improved symptoms of anxiety and depression in patients with major depressive disorder (MDD) who were not responding to antidepressants.

Sudarshan Kriya yoga is a meditation technique that focuses on rhythmic breathing exercises, with the aim of placing the mind into a deep, restful state.

» Although medication is considered a first line therapy for treating depression, more than half of patients do not respond to it.

» In this pilot study just 8 weeks of yogic breathing significantly improved symptoms in those with major depressive disorder.

» Researchers suggest it is an effective and low cost addition to conventional treatment.

For their study, the researchers enrolled 25 adults who had been diagnosed with MDD. All had been taking antidepressants for at least 8 weeks but had seen no significant improvement in symptoms.

Participants were randomly assigned to one of two groups: yoga or a waiting list. Those in the yoga group were required to take part in a six-session program in the first week, which incorporated Sudarshan Kriya yoga exercises, yoga postures, sitting medication, and stress education. For the remaining 7 weeks, participants were asked to attend a once-weekly Sudarshan Kriya yoga follow-up session, as well as complete a practice session at home.

Those in the waiting list group were offered the yoga intervention at the end of the 8 weeks. Both groups continued with their antidepressant therapy during the 8-week study period.

“With such a large portion of patients who do not fully respond to antidepressants, it’s important we find new avenues that work best for each person to beat their depression,” said lead researcher Dr Anup Sharma, a neuropsychiatry research fellow at the Department of Psychiatry at the University of Pennsylvania’s Perelman School of Medicine. “Here, we have a promising, lower-cost therapy that could potentially serve as an effective, non-drug approach for patients battling this disease.”

The meditation technique, which is practiced in both a group setting and at home, includes a series of sequential, rhythm-specific breathing exercises that bring people into a deep, restful, and meditative state: slow and calm breaths alternated with fast and stimulating breaths.

In past studies, this kind of breathing practice has demonstrated benefits in patients with milder forms of depression, depression due to alcohol dependence, and MDD in a hospital setting. This is the first study to show that it can help those who are outpatients.

The weight of these studies suggest that yoga and other controlled breathing techniques can potentially adjust the nervous system to reduce stress hormones.

Results of the current study suggest that yogic breathing may be a useful additional treatment for MDD patients who have not responded to antidepressants. “The next step in this research is to conduct a larger study evaluating how this intervention impacts brain structure and function in patients who have major depression,” Sharma said.