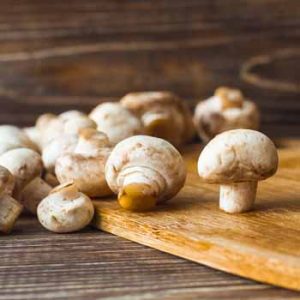 Mushrooms are both nutritionally and medicinally active. [Photo: Bigstock]

Fantastic fungi – the nutritional and medicinal benefits of mushrooms

If you are in the dark about mushrooms you could be missing out on some key nutritional – and medicinal – benefits.

Although most people lump them in with their daily plant foods, mushrooms aren’t technically plants; they are fungi – an entirely separate classification from plants or animals.

Nutritionally mushrooms provide many of the benefits of plant foods, as well as benefits more commonly found in animal-based foods, so by adding more to your diet you are getting the best of both worlds in one food.

In addition, if you are trying to cut down on meat, mushrooms can add a ‘meaty’ taste and mouth feel to meat-free meal options. As a bonus there is some evidence to show that substituting mushrooms for meat may aid weight loss.

Although they are low in calories, as well as fat- and cholesterol-free, mushrooms provide important nutrients, including:

Most common mushroom types you buy in the supermarket are just the same mushroom at different stages of development thus the spectrum from the tiny button to the large Portobello all share common nutritional benefits. Others like shiitake and reishi are different species of ‘super mushrooms’ that appear to have extra healing powers.

Increasingly science is showing that many mushrooms are not just nutritionally active they are medicinally active as well. Traditionally all mushrooms are considered ‘cleansing’ and emerging research is showing how this translates into real world terms, especially when it comes to supporting immunity and – in the lab at least – combating cancer.

If you are new to the world of mushrooms here’s some super-mushroom species to look into.

Cordyceps sinensis has been used in Chinese medicine for thousands of years, primarily as a rejuvenating tonic. It is taken to relieve weakness and fatigue, and is often prescribed for the elderly to ease general aches and pains, and is thought to strengthen bone marrow and muscles.

Athletes, including Chinese Olympic athletes, often use cordyceps to boost performance, and there is some evidence for this. In laboratory mice it has been shown to increase the endurance by about 20%.  Human studies with elderly people have found that cordyceps does seem to improve stamina and exercise performance by around 10%.

One review suggests that cordyceps is of value in reducing cholesterol and atherosclerosis, improving sexual functioning and minimising the effects of ageing.

The Chinese call maitake (Grifola frondosa) the ‘dancing mushroom’. It’s a huge fungi with large frond-like parts. Traditionally maitake is used as a general tonic, but it’s recently been discovered to have more specific, anti-cancer properties.

Most research has been done in the laboratory, where beta-glucans derived from maitake have been shown to kill over 95% of prostate cancer cells. In Japan, where maitake is also a popular remedy, there is evidence that a supplement combining maitake beta-glucan and whole maitake powder produced “significant improvement” or  “cancer regression” in over 50% of liver, breast and lung cancer patients and a stronger immune response when the supplement was taken with conventional chemotherapy.

Other research has investigated maitake’s value in diabetes. Animal studies have shown that it can significantly reduce glucose levels in the blood. Although poorly studied in humans one trial did show similar effects.

Another mushroom that is showing promise in diabetes is reishi (Ganoderma lucidum). In China, it is known as the “mushroom of immortality” and the “elixir of life.” In preliminary clinical trials conducted in New Zealand, reishi has been successfully used to reduce blood glucose in diabetic patients. Similar results have been seed in animal studies.

Animal studies have also shown that reishi has anti-cancer properties. The reason appears to be that it stimulates the parts of the immune system responsible for attacking cancer cells, principally Tumour Necrosis Factor (TNF). A Cochran review of reishi’s anti-cancer effects concluded that that patients who had been given reishi alongside with chemo/radiotherapy were more likely to respond positively compared to chemo/radiotherapy – or the reishi – alone.

A popular ingredient in Chinese cuisine and folk medicine, shiitake (Lentinus edodes) is believed to boost chi (life energy) and fend off a variety of ailments, including colds, flu and bronchial inflammations.

The major active ingredient in shiitake is a potent chemical called lentinan (another type of beta glucan), which has been shown to stimulate the immune system. Lentinan has been shown to protect the liver, and been used in the treatment of chronic fatigue syndrome, HIV and cancer.

The cancer picture is rather mixed, however. Although injecting lentinan into animals has been shown some promise with breast and colon cancer cells, human clinical trials are rare and the evidence to date is disappointing. In a study of 62 American men with prostate cancer, for example, a six month treatment with shiitake extract failed to halt the progress of prostate cancer for the majority of men who took shiitake extract.

Coriolus is a long-established folk medicine for cancers of all kinds, and is traditionally taken in a tea-like infusion. Modern science has shown that hot water extracts of the mushroom contain beta-glucan polysaccharides similar to those in reishi and have immunostimulant and anti-tumour properties.

PSK was developed for cancer treatment in Japan and, when used alongside conventional treatment, it appears to improve survival rates in patients with gastric and colorectal cancers. There is also some evidence of a similar benefit in cancer of the lung, as well as breast, nasopharynx, oesophagus and stomach.

PSP, a related polysaccharide, has been less studied, but has shown powerful benefits on the immune system, “substantially” reducing pain and improving quality of life in a wide variety of cancers.

Just how PSK works is still unclear. Research suggests it inhibits the action of carcinogens such as tobacco or asbestos, helping to prevent cancer growing in the first place. It also seems to inhibit the enzymes that cause cancer to spread. PSK also seems to boost the body’s natural defences in the form of natural killer and lymphocyte-activated killer cells and appears to have an antioxidant effect as well.

We tend to draw false lines between what is food and what is medicine, in much the same way that we draw false distinctions between culinary and medicinal herbs. This tendency is more pronounced in the West – in the East and in traditional healthcare systems the lines are more blurred.

Regularly incorporating mushrooms into your diet is a healthful thing to do. They are beneficial eaten raw or cooked. Eaten raw, mushrooms have more probiotic oligosaccharides such as chitin and beta-glucan, which feed friendly bacteria in the gut. Cooking mushrooms increases total starch, fibre and fat content and frees up more antioxidants including carotenoids and ferulic acid,  but does destroy some of the vitamin C.

But if you are looking for something more specific with more concentrated healing power, there are a number of commercially available mushroom products through health stores that are worth exploring.

Many mushroom supplements are sold as dried (powdered) or liquid products. There is very little to guide consumers about which is best though traditionally liquids are thought to be more bioavailable than powders. This may simply be because liquid extracts are more concentrated than powders. It may take some experimentation – perhaps under the guidance of a nutritionist or herbalist – to find what works best for you.

Mushrooms are both nutritionally and medicinally active. [Photo: Bigstock]