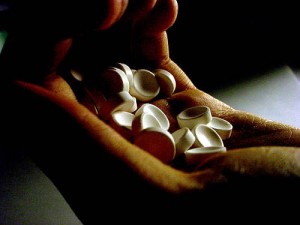 Depression sufferers are more likely to suffer relapse when on medication

Patients who use anti-depressants are much more likely to suffer relapses of major depression than those who use no medication at all, concludes a McMaster researcher.

In a paper that is likely to ignite new controversy in the hotly debated field of depression and medication, Paul Andrews an assistant professor in the Department of Psychology, Neuroscience & Behaviour at McMaster University, Ontario, Canada, says that patients who have used anti-depressant medications can be nearly twice as susceptible to future episodes of major depression.

His findings are published in the journal Frontiers of Psychology.

Andrews and his colleagues studied dozens of previously published studies to compare outcomes for patients who used anti-depressants compared to those who used placebos. Their analysis suggests that people who have not been taking any medication are at a 25% risk of relapse, compared to 42% or higher for those who have taken and gone off an anti-depressant.

Andrews says anti-depressants interfere with the brain’s natural self-regulation of serotonin and other neurotransmitters, and that the brain can overcorrect once medication is suspended, triggering new depression.

“We found that the more these drugs affect serotonin and other neurotransmitters in your brain – and that’s what they’re supposed to do – the greater your risk of relapse once you stop taking them,” Andrews says.

“All these drugs do reduce symptoms, probably to some degree, in the short-term. The trick is what happens in the long-term. Our results suggest that when you try to go off the drugs, depression will bounce back. This can leave people stuck in a cycle where they need to keep taking anti-depressants to prevent a return of symptoms.”

Andrews believes depression may actually be a natural and beneficial – though painful – state in which the brain is working to cope with stress.

“There’s a lot of debate about whether or not depression is truly a disorder, as most clinicians and the majority of the psychiatric establishment believe, or whether it’s an evolved adaptation that does something useful,” he says.

Not every case is the same, and severe cases can reach the point where they are clearly not beneficial, he emphasises.

Nevertheless more than 40% of the population may experience major depression at some point in their lives. Most episodes are triggered by something external, traumatic events such as the death of a loved one, the end of a relationship or the loss of a job.

Andrews suggests the brain may blunt other functions such as appetite, sex drive, sleep and social connectivity, to focus its effort on coping with the traumatic event.

Just as the body uses fever to fight infection, he believes the brain may also be using depression to fight unusual stress.

Depression sufferers are more likely to suffer relapse when on medication