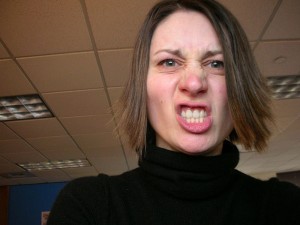 Feeling constantly angry and bitter can have a devastating effect on your health. [Photo: Wikimedia Commons]

Persistent bitterness can lead to illness

Persistent feelings of bitterness, anger and hostility can make a person more vulnerable to illness, according to new Canadian research.

Carsten Wrosch, a professor in the Concordia University Department of Psychology in Montreal has spent the last 15 years, studying how negative emotions, such as regret or sadness, affect people. Most recently, he has focused his attention on the impact of bitterness and its related emotions anger and recrimination.

Unlike regret, which is about self-blame and a case of “woulda, coulda, shoulda,” bitterness points the finger elsewhere  laying the blame for failure on external causes. “When harboured for a long time,” says Wrosch, “bitterness may forecast patterns of biological dysregulation (a physiological impairment that can affect metabolism, immune response or organ function) and physical disease.”

Wrosch argues that bitterness can be avoided, if people who experience failure can find other ways to fulfil their goals. If they can’t then, he says, it’s essential to disengage from the fruitless effort (e.g. to get promoted, to save a marriage) and reengage in something that’s equally meaningful (e.g. a new job or passion).

Called self-regulation processes, disengaging and reengaging can be necessary for a person to avoid bitter emotions.

In some cases, overcoming bitterness demands more than self-regulation. When bitterness arises from blaming other people, then recovery may involve others. “In order to deal with bitter emotions there may need to be something else required to enable a person to overcome the negative emotion.

That something, says Wrosch is forgiveness.

Feeling constantly angry and bitter can have a devastating effect on your health. [Photo: Wikimedia Commons]