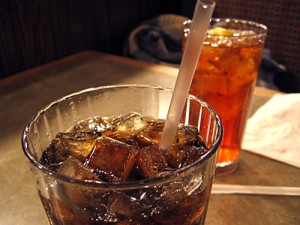 Fancy a little flame retardant with your soda?

Natural Health News — It’s been banned in food throughout Europe and Japan. But it has been an additive in sodas for decades in North America.

Now scientists are expressing a renewed concern for the health implications of drinking brominated vegetable oil, or BVO, which is found in 10% of sodas in the United States.

BVO was patented in the 1960s by chemical companies as a flame retardant. it is also used in light-sensitive photographic printing papers, as an additive for gasoline, to agricultural fumigants.It is composed mainly of bromine, a poisonous chemical whose vapours are considered both corrosive and toxic.

It beggars belief that it should find it’s way into soft drinks, especially when you consider that consuming bromine-containing products increases bromine content in the body. This, in turn, competes with iodine and causes iodine deficiency creating a condition called “Brominated Thyroid.”

Thyroid damage isn’t the only problem. Bromine is also a potential carcinogen and causes a number of disorders starting from simple headache, fatigue, weight-gain to cancer, heart and kidney diseases.

Coca-Cola and Pepsi do not contain BVO but a whole host of popular fruit flavoured sodas – the ones with a cloudy appearance – do.

Soda makers and industry groups say BVO is safe and that their products meet all government standards. But there is now concern that the FDA limit for brominated oil in sodas is based on outdated data from the 1970s, and that it is time for this ubiquitous additive to be re-examined. Their concern is that it builds up in tissues, and may have the same effects as brominated flame retardants.

A   binge — for instance at a party or during a long night’s video gaming — has left some soda drinkers in need of medical attention for skin lesions, memory loss and nerve disorders, all symptoms of overexposure to bromine.

Other studies suggest that BVO could be building up in human tissues, just like other brominated compounds such as flame retardants. In animal studies, big doses have caused reproductive and behavioural problems.

In 1970, scientists in England found that rats on a six-week diet containing 0.8 percent brominated maize oil had stockpiles of bromine in their fat tissue. The bromine stayed there even after the rats returned to a control diet for two weeks.

Another study around the same time confirmed that bromine was building up in humans. Researchers measured the serum levels of people in the United Kingdom – before BVO had been banned – and in their counterparts in the Netherlands and Germany, where BVO was not used.The study found that UK residents had the significantly higher levels of BVO in their bodies and that the largest amounts  were found in tissues of children.

Based on data from the early studies like these, the FDA removed BVO from the Generally Recognized as Safe (GRAS) list 1970. But in 1977 after heavy lobbying from the soda industry, the FDA approved the interim use of BVO at 15 ppm in fruit-flavoured beverages, pending the outcome of additional studies.

Critics say that soda makers in North America could easily replace BVO with alternatives such as naturally-derived hydrocolloids – chemicals that are used in many sodas in Europe. But manufacturers are resistant, insisting that reformulation is unnecessary and would be costly.