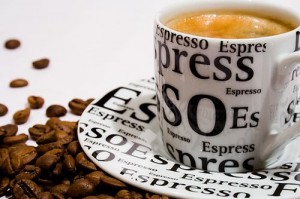 The amount of caffeine in a shot of espresso can vary wildly [Image: Demion - Wikimedia Commons]

How much caffeine in a cup? It depends…

Natural Health News — A new study has highlighted the potential health concerns over the caffeine content of drinks served in coffee shops.

The research, from the University of Glasgow and published in the  journal Food and Function, suggests that drinking a single serving of espresso coffee could increase the risk of caffeine toxicity in women who are pregnant or taking oral contraceptives, young children and people with liver disease.

In the general public, the effects of caffeine overload can include headaches, chest pain, anxiety, increased heart rate and abdominal cramping.

A very high intake of caffeine during pregnancy could result in low birth weight, increasing the risk of health problems such as high blood pressure, type-2 diabetes and heart disease for the baby in later life.

In the UK Food Standards Agency recommends an upper limit of 200mg of caffeine per day for pregnant women. In the US the Food and Drug Administration (FDA) makes a similar recommendation and notes that caffeine doesn’t just come in a cup , but is also present in sodas, sweets and candies and some medicines making it hard to keep track of how much both adults and children ingest each day.

In this study, laboratory analysis of single-shot espresso coffees available from 20 different commercial outlets in Glasgow showed a wide range of variation in the amount of caffeine in each, from 51mg to 322mg. Four of the coffees tested contained caffeine levels of greater than 200mg.

Professor Alan Crozier of the University of Glasgow’s School of Medicine, who led the research, said: “The variations in the amount of caffeine reflect differences in the batch-to-batch bean composition, roasting procedures, grinding conditions and the many variables in the coffee-making process such as water temperature and the ratio of water to coffee.

“Although the sample size for the study is small, it appears that there is a good deal of difference in the coffees available to consumers and there is currently no way for them to know how much caffeine is contained in their drinks. Coffee connoisseurs could easily but unknowingly drink very high levels of caffeine in a single cup.

“Although the response to caffeine varies from person to person, caffeine is generally cleared from the body in around five hours. However, it can increase to 30 hours in women taking oral contraceptives, pregnant women, the developing foetus, young children and people suffering from liver disease, which increases their susceptibility to caffeine toxicity.

“The data we have gathered suggests there is a real need for a definitive study of caffeine content and consumption of coffees, and for customers to be given the information they need to make an informed choice about their intake.”

The amount of caffeine in a shot of espresso can vary wildly [Image: Demion - Wikimedia Commons]