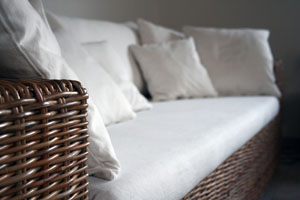 It looks inviting, but just lying on the sofa can make you pile on the pounds

Lying on the sofa makes you fatter

Natural Health News — Many doctors now accept that there is more to weight gain than calories in and calories out.

But new data on the way that what scientists are calling  “active inactivity” can cause you to pile on the pounds, shows just how true this is.

According to data published in the American Journal of Physiology – Cell Physiology sitting all day, long or lying on the sofa watching TV, could redistribute weight in such a way that it actually creates new fat cells.

In a really unique study the Israeli researchers have shown that preadipocyte cells (essentially ‘baby’ fat cells) turn into fat cells faster and produce even more fat when subject to prolonged periods of “mechanical stretching loads” – the kind of weight we put on our body tissues when we sit or lie down.

“Obesity is more than just an imbalance of calories. Cells themselves are also responsive to their mechanical environment. Fat cells produce more triglycerides, and at a faster rate, when exposed to static stretching.”

Triglycerides are a type of fat, or lipid,  found in the blood. The body uses them for energy. We all need some triglycerides for good health. But high levels can raise the risk of heart disease and may be a sign of metabolic syndrome.

In the lab, Prof. Gefen and his fellow researchers stimulated preadipocytes with glucose or insulin to grow them into fat cells. Then they placed individual cells in a cell-stretching device that mimicked the stress they would be put under during extended periods of sitting or lying down. Another group of cells was not stretched.

After just two weeks of consistent stretching, the test group developed significantly more – and larger – lipid droplets. By the time the cells reached maturity, the ones that received mechanical stretching had developed50% more fat than the non-stretched cells.

These findings, says Prof Geffen, indicate that we need to take our cells’ mechanical environment into account as well as pay attention to calories consumed and burned.

We have reported elsewhere on this site that prolonged sitting can be detrimental to health because of the way habitual sitters lose muscle tone. This study adds a new dimension to the story and give us an even greater mandate to ensure we stay active.

Although there are extreme cases, such as people confined to wheelchairs or beds due to medical conditions, many of us live a too sedentary lifestyle, spending most of the day behind a desk. Even somebody with healthy diet and exercise habits will be negatively impacted by long periods of inactivity, he noted.

It looks inviting, but just lying on the sofa can make you pile on the pounds