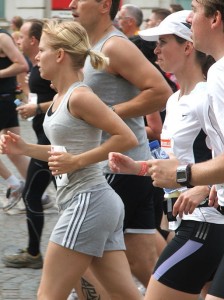 Natural Health News — Battling colds and doing (or pledging to do) more exercise are familiar activities for most of us in January. But, say scientists, different levels of exercise can actually significantly increase or decrease your chances of catching a cold.

While regular moderate exercise can reduce the risk of catching upper-respiratory tract infections (URTIs), prolonged strenuous exercise, such as marathons, can make an individual more susceptible.

URTIs are acute infections that affect the nose, throat and sinuses, and include the common cold, tonsillitis, sinusitis and flu. They are caused by viruses circulating in the environment.

While we are constantly exposed to these viruses, it is the status of our immune system that determines whether we succumb to infection or not. Exercise can have both a positive and negative effect on immune function, combined with genetics and other external factors like stress, poor nutrition and lack of sleep. Collectively these factors determine an individual’s susceptibility to infection.

In a talk at the recent Association for Science Education (ASE) Conference, in Liverpool, Professor Mike Gleeson from Loughborough University said that if you have a tendency to be a couch potato then you probably have an average risk of catching 2-3 URTIs per year. But, he says, “research shows that those undertaking regular moderate exercise (e.g. a daily brisk walk), can reduce their chance of catching a respiratory infection, such as a cold, by up to almost a third.”

This effect has been shown to be the result of the cumulative effect of exercise leading to long-term improvement in immunity.

This is a topical area of research in the year of the Olympics, says Professor Gleeson.

“In the weeks following a marathon, studies have reported a 2-6 fold increase in the risk of developing an upper respiratory infection. The heavy training loads of endurance athletes make them more susceptible to URTIs and this is an issue for them as infections can mean missing training sessions or underperforming in competitions.”

The major players in this immune regulation are immune cells called Natural Killer (NK) cells which are important weapons in the fight against viral infections. NK cells recognise viral-infected cells as foreign invaders and force them to commit suicide.

“During moderate exercise the activity of NK cells is enhanced, whereas stressful endurance activities such as marathons can turn down NK cell activity. These changes are tightly regulated by stress hormones and other immune cells.”

According to Gleeson the take-home message is clear:

“Moderate exercise has a positive effect on the immune system. So to keep colds at bay, a brisk daily walk should help – it’s all about finding a happy medium.”