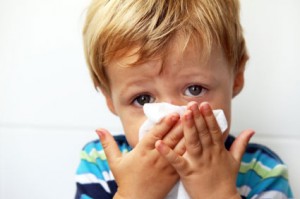 Natural Health News — The new school year inevitably brings with it a whole new rash of colds and coughs for our children.

But a new study has shown that a simple combination of probiotics and vitamin C could hold the key to keeping kids healthy in classrooms during the upcoming winter season.

In the trial 57 children aged 3 to 5 were given Lactobacillus and Bifidobacterium probiotic strains and vitamin C, or an identical looking placebo, and observed over a six month period. None of the children received the flu vaccine during the study period.

In addition to a reduction in the incidence rate of URTIs, the number of school days missed, the number of days of use of antibiotics, painkillers, cough medicine or nasal sprays was also lower in the active group and, say the researchers, was significant in terms of reducing the use of cough medicine.

“Previously, a lot of trials had simply looked at the rather more subjective area of symptoms rather than at ‘harder’ outcomes such as absenteeism or use of medication,” said Nigel Plummer, research leader and MD of Welsh firm and trial sponsor, Cultech.

Plummer points to another meta-analysis published earlier in 2014 , which examined 20 trials involving children, adults and the impact of probiotics on the intensity and duration of URTIs.

“The conclusion of that analysis was that probiotics led to a decrease in intensity and duration of 30%,” he said. “That’s quite a consistent effect, and I don’t think the traditional combination of vitamin C and zinc, for instance, achieves that kind of consistency. Our trial has confirmed that effect – and more. We looked at practical outcomes including absence from pre-school, visits to the doctor, the use of antibiotics and other medication.”

Other meta-analyses have also shown that probiotics are effective in preventing upper respiratory tract infections.