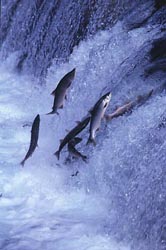 Salmon are top predators which means that toxic pollution, such as mercury, accumulates in their meat [Image: Wikimedia Commons]

On the otherthe way we fish is environmentally unfriendly and according to a new study in the journal Environmental Research can raise mercury levels that alter hormones and increase chronic stress and immune responses in children.

To understand more about the pros and cons of fish eating in children, researchers examined the fish consumption of 100 children from 9 to 11 years old in Oswego County, New York.

Details on the children’s diet came from their parents. Blood mercury levels, blood lipids (fats), cortisol in the children’s saliva and inflammation markers were then measured.

However, the fish eaters also had much higher – almost three times higher – mercury levels than non-fish eaters (1.1 and 0.4 micrograms per litre of blood, respectively).

At the same time, children with higher mercury also had higher inflammatory markers in their blood.

Cortisol is a hormone related to stress. Consistently lower cortisol levels may sound like a good , like all hormones cortisol is finely balanced and has a natural cycle in the body. Levels fluctuate naturally during the day and are higher in the morning and lower in the afternoon.

It is mercury’s interference with this natural cycle – itself a form of chronic physiological stress – that poses a health risk.

The study raises concern about children’s exposure to mercury through fish eating, tying it for the first time to hormone changes that increase chronic stress and associated immune system dysfunction.

Crucially, the mercury levels measured in the children were well below the levels considered a health risk by the US Environmental Protection Agency.

The findings are in line with prior studies in people and fish. The toxic metal increased inflammation in miners exposed to mercury. Animal studies find reduced cortisol levels in mercury-contaminated fish after capture stress. The authors say more research is neededs to understand it’s full effects in children.

Salmon are top predators which means that toxic pollution, such as mercury, accumulates in their meat [Image: Wikimedia Commons]