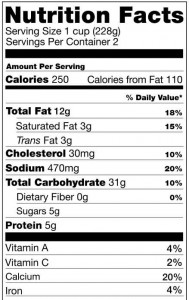 A study by Canadian, French and American researchers shows that US consumers know much more about the fat content of the foods they buy than their French counterparts.

And yet, paradoxically, the obesity rate is nearly three times higher in the United States (35%) than it is in France (12%).

In light of these results, published in a recent edition of the British Food Journal, the researchers cast doubt on the notion that providing nutritional information is an effective way to encourage healthy eating habits.

The researchers asked over 300 French, Quebec, and American consumers to answer a questionnaire designed to test what they knew about dietary fats. The questions dealt with the amount and types of fat contained in various foods and what the nutritional recommendations are regarding these fats. Participants were asked to answer “Don’t know” rather than hazard a guess.

Significantly, French respondents admitted to not knowing the answer to 43% of the questions, while the equivalents for Quebec and the United States were 13% and 4% respectively.

For instance, 55% of French respondents said they did not know the percentage of fat in whole milk, compared with 5% for Quebec and 4% for the United States. The same trend was observed for butter, margarine, and vegetable oils.

Another key finding was that when participants tried to answer, Americans were most likely to be right, followed by Quebecers, with the French bringing up the rear. For example 6% of Quebecers, 9% of Americans, and 17% of the French did not know the recommendations regarding saturated and unsaturated fats in a healthy diet.

Losing sight of the whole picture

“The difference among respondents’ knowledge,” said Professor Doyon, “essentially indicates that the French don’t take much of an interest in the nutrients contained in the foods they eat. The information is on the package, but they don’t read it.”

According to the researchers, the correlation found between extensive nutritional knowledge and high obesity rates suggests that focusing on detailed nutritional information may not be the best strategy for encouraging healthy eating habits.

“It’s an approach that presents information to consumers in a broken down form,” suggested Dr. Dr. Maurice Doyon of the Faculty of Agriculture and Food Sciences, at Quebec’s Université Laval. “This may lead them to think of food in terms of its fat, carbohydrate, and caloric content and lose sight of the whole picture. It might be better to focus on what constitutes a healthy, complete, and balanced meal.”