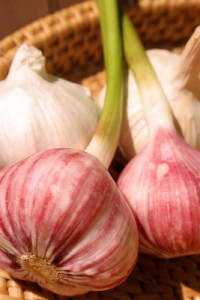 Natural Health News — Researchers have found that a compound in garlic is 100 times more effective than two popular antibiotics at fighting the Campylobacter bacterium, one of the most common causes of food poisoning.

The work, carried out at Washington State University, was published recently in the Journal of Antimicrobial Chemotherapy.

In it researchers looked at the ability of the garlic-derived compound, diallyl sulphide, to kill the bacterium which is protected by a slimy biofilm that makes it 1,000 times more resistant to antibiotics than the free floating bacterial cell. They found the compound can easily penetrate the protective biofilm and kill bacterial cells by combining with a sulphur-containing enzyme, subsequently changing the enzyme’s function and effectively shutting down cell metabolism.

The researchers found the diallyl sulphide was 100 times more effective than the same dose of the antibiotics erythromycin and ciprofloxacin and often would work in a fraction of the time.

Campylobacter is the most common bacterial cause of food poisoning in the UK and US and probably the world. It causes symptoms such as diarrhoea, cramping, abdominal pain and fever. The bacteria also are responsible for triggering nearly one-third of the cases of a rare paralysing disorder known as Guillain-Barré syndrome.

Most infections stem from eating raw or undercooked poultry or foods that have been cross-contaminated via surfaces or utensils used to prepare poultry.

The scientists cautioned that while eating garlic is a generally healthy practice, it is unlikely to prevent Campylobacter-related food poisoning.

However, the discovery, say the scientists, opens the door to new treatments for raw and processed meats and food preparation surfaces. Diallyl sulphide could, for instance be an effective preservative in packaged foods like potato and pasta salads, coleslaw and deli meats, but also used to clean preparation surfaces.

While the scientists congratulate themselves on proving garlic’s antibiotic properties gainst speciic bacterial strains, the concept of garlic as an alternative antibiotic is hardly new. There are decades of good evidence to show that garlic as a supplement  is a useful alternative to antibiotics. See here for a rundown of its medicinal properties and see also related articles (left).