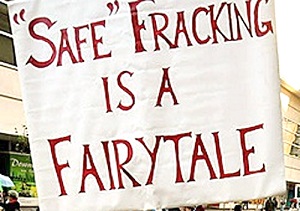 Natural Health News — Many chemicals used in hydraulic fracturing, or fracking, can disrupt not only the human body’s reproductive hormones but also the glucocorticoid and thyroid hormone receptors, which are necessary to maintain good health.

The findings were presented recently at a joint meeting of the International Society of Endocrinology and the Endocrine Society joint meeting in Chicago.

“Among the chemicals that the fracking industry has reported using most often, all 24 that we have tested block the activity of one or more important hormone receptors,” said the study’s presenting author, Christopher Kassotis, a PhD student at the University of Missouri, Columbia.

“The high levels of hormone disruption by endocrine-disrupting chemicals (EDCs) that we measured, have been associated with many poor health outcomes, such as infertility, cancer and birth defects.”

Hydraulic fracturing is the process of injecting numerous chemicals and millions of gallons of water deep underground under high pressure to fracture hard rock and release trapped natural gas and oil.

Spills of wastewater can contaminate surface and ground water and in earlier research, these same scientists found that water samples collected from sites with documented fracking spills in Garfield County, Colorado, had moderate to high levels of EDC activity that mimicked or blocked the effects of the female hormones (estrogens) and the male hormones (androgens) in human cells.

However, water in areas away from these gas-drilling sites showed little EDC activity on these two reproductive hormones.

The new study extended the analysis to learn whether high-use fracking chemicals changed other key hormone receptors besides the estrogen and androgen receptors. (Receptors are proteins in cells that the hormone binds to in order to perform its function.)

A risk to health

Specifically, the researchers also looked at the receptor for a female reproductive hormone, progesterone, as well as those for glucocorticoid – a hormone important to the immune system, which also plays a role in reproduction and fertility – and for thyroid hormone. The latter hormone helps control metabolism, normal brain development and other functions needed for good health.

Among 24 common fracking chemicals that Kassotis and his colleagues repeatedly tested for EDC activity in human cells, 20 blocked the estrogen receptor, preventing estrogen from binding to the receptor and being able to have its natural biological response, he reported.

Kassotis cautioned that mixtures of these chemicals act together to make their hormone-disrupting effects worse than any one chemical alone, and tested drinking water normally contains mixtures of EDCs.

What is more EDCs do not work like normal toxins; small doses can have big effects.

“We don’t know what the adverse health consequences might be in humans and animals exposed to these chemicals,” Kassotis said, “but infants and children would be most vulnerable because they are smaller, and infants lack the ability to break down these chemicals.”