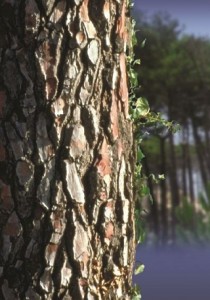 Extract of maritime pine bark, or Pycnogenol, is one of the natural remedies recently shown to lower the risks associated with metabolic syndrome

Metabolic syndrome is a suite of health problems: carrying excess weight around your waist, also known as ‘central obesity’, raised blood pressure and raised levels of ‘unhealthy’ LDL cholesterol and low levels of ‘healthy’ HDL cholesterol and poor glucose control. When they occur together these problems increase the risk of developing cardiovascular disease and diabetes.

The first study, published in the journal Phytotherapy Research evaluated the effects of six months of supplementation with Pycnogenol, or maritime pine bark extract, on people with metabolic syndrome.

The study involved 64 people (aged 45-55 years) – each of whom had all five of these risk factors. The study participants were given 150 mg daily of Pycnogenol; another group of 66 people with the same risk profiles were used as controls.

Compared to those in the control group, those taking Pycnogenol showed a decreased waist circumference, lower triglycerides, blood pressure, fasting glucose, and plasma free radicals, as well as increased the HDL cholesterol levels.

A second study, published in Nutrition Research, assessed the effects of green tea on glutathione levels in metabolic syndrome patients

Many people with metabolic syndrome have low levels of glutathione. This, in turn, contributes to oxidative stress and plays a key role in the worsening of the condition. Glutathione deficiency may also be linked to their increased risk of diabetes and cardiovascular disease.

The small US study included 35 obese adults who had metabolic syndrome. They were divided into three groups, and for eight weeks consumed one of the following daily:

The green tea did not affect levels of other antioxidants such as carotenoids, tocopherols or glutathione peroxidase (a family of enzymes which reduce oxidized lipids to their nontoxic form) and catalase (another antioxidant enzyme) activities. It did, however, significantly reduce blood levels of iron, whereas copper, zinc and selenium were not affected.

Green tea has been linked in previous studies with a wide range of health benefits. These benefits are usually attributed to the high level of powerful antioxidants found in green tea called polyphenols, which have been shown to promote weight loss, lower cholesterol, improve heart health, aid in digestion and decrease the risk of neurodegenerative diseases.

Extract of maritime pine bark, or Pycnogenol, is one of the natural remedies recently shown to lower the risks associated with metabolic syndrome