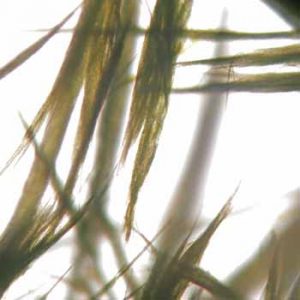 Coibamide A, isolated from marine algae, might be able to fight cancer through a mechanism of action unlike that of any existing drug. [Photo: Bigstock]

Natural Health News — Could a slippery glob of algae hold the key to the next anti-cancer drug?

According to new research into a compound produced by a unique community of blue-green algae, the answer could be yes.

The compound in question is called coibamide A, discovered eight years ago by scuba-diving scientist Kerry McPhail, PhD, of Oregon State University. A new study shows coibamide A has potent anti-cancer activity in mice and cell cultures that model brain tumours and triple negative breast cancer, two of the most aggressive and difficult-to-treat types of cancer.

“The chemical diversity found in nature has always been a significant source of inspiration for drug design and development, but although the medicinal properties of plants have been recognized for thousands of years, marine environments remain relatively unexplored,” said Jane Ishmael, Ph.D., associate professor of pharmacology at Oregon State University and the lead author of the new study.

“We think that with this compound, nature has already found a way to target some of the specific proteins that are relevant to the growth of tumours.”

Ishmael presented her research, ahead of its publication, at the American Society for Pharmacology and Experimental Therapeutics Annual Meeting during Experimental Biology 2016.

McPhail, who specializes in blue-green algae and dives all over the world in search of interesting species, collected the algae during a dive in Panama’s Coiba National Park. It turned out to be a mash-up of at least three algal species that grow together on rocks in areas with fast-moving water. In addition to Panama, similar algal communities has been found in the Red Sea and off the coast of South Africa.

Blue-green algae, or cyanobacteria, have existed for at least two billion years and are one of the oldest life forms on Earth.

After McPhail isolated coibamide A from the original algal specimen, it was run through a National Cancer Institute screening system that looks for potential anti-cancer activity across 60 different types of cancer.

Coibamide A showed a pattern of activity unmatched by any other compound, suggesting it might be able to fight cancer through a mechanism of action unlike that of any existing drug.

» Blue-green algae, or cyanobacteria, have existed for at least two billion years and are one of the oldest life forms on Earth.

» Scientists have discovered that a substance called coibamide A, isolated from an ancient form of blue-green algae may help fight hard to treat cancers in ways that conventional drugs don’t – essentially starving cancer cells to death.

» The substance has shown encouraging results in early laboratory tests on tumours in the brain and breast.

Focusing on hard to treat cancers

The screening revealed coibamide A to be capable of killing many types of cancer cells, but Ishmael decided to focus subsequent studies on two types in particular – brain tumours, or glioblastomas, and a breast cancer subtype known as triple negative breast cancer.

“Patients with many other types of cancer already have some really excellent treatment options, so we were interested in focusing on some of the kinds of cancer that haven’t had as much success with pharmacological development,” said Ishmael. “For many brain tumours, for example, there are very few options and the prognosis has remained grim for many years.”

The team’s experiments in cell cultures, conducted with funding from an American Brain Tumor Association Discovery Grant, showed that coibamide A cuts off the cancer cells’ ability to communicate with blood vessels and other cells, eventually starving the cell and triggering its death.

Still some challenges ahead

Glioblastomas are particularly difficult to treat because these tumours grow exceptionally quickly and do not respond well to most available chemotherapy drugs. Surgery, followed by radiation treatment, is usually recommended, but it is difficult to remove every last cancer cell and the tumour often rebounds.

Ishmael said even if coibamide A itself cannot enter the brain or turns out to have adverse side effects, knowing its structure and mechanism of action can help researchers develop new drugs that mimic coibamide A’s effects.

“So far, there isn’t a drug in clinical use or in any clinical trials that works in this way. We’re using it to try to reveal a new pathway to trigger cell death in these cancer cells that have traditionally been considered very resistant to cell death,” said Ishmael.

Coibamide A, isolated from marine algae, might be able to fight cancer through a mechanism of action unlike that of any existing drug. [Photo: Bigstock]