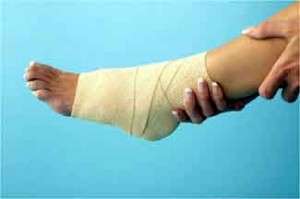 Natural Health News — A topical pain medicine made of 12 natural ingredients is as effective as 1% diclofenac gel, in reducing pain and improving function in adults with ankle sprain injuries.

The study which included 449 physically active participants aged 18-40 years who had a mild to moderate ankle sprains was published in the online in the International Journal of Clinical Practice.

Patients were randomly assigned to treatment with Traumeel ointment, Traumeel gel or 1% diclofenac gel, and instructed to apply two grams of product topically three times a day for 14 days, with six weeks of follow up.

Results show that after seven days of treatment, topical Traumeel ointment and gel was shown to be as effective as the non-steroidal anti-inflammatory (NSAID) diclofenac gel in terms of reducing pain and restoring normal function of the joint.

At six weeks, all patients reported total pain relief and normal functioning. Over the short term of this study both the homoeopathic and conventional remedies were well tolerated by the users.

Diclofenac gel is a current ‘gold standard’ therapy for ankle sprains and other types of musculoskeletal pain, but its long-term use can bring serious side effects such as gastrointestinal bleeding and increased cardiovascular disease risks.

Traumeel is a homoeopathic combination remedy that comes in several different forms: tablets, gel, ointment, and even in injectable form (though this is rarely used outside of Europe).

Several studies have shown that Traumeel tablets work just as well as diclofenac for several types of pain.

When comparing Traumeel ointment with diclofenac gel for tendinopathy in a 2005 study researchers concluded “The results suggest that Traumeel ointment is an effective alternative to non-steroidal anti-inflammatory drugs therapy for the acute symptomatic treatment of patients with tendinopathy.”