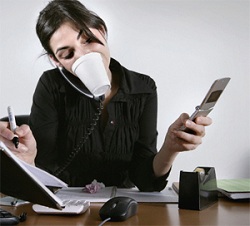 Technology makes stressful demands on us, but meditation can help keep us focused

Meditation takes the stress out of multitasking

Natural Health News — Need to do some serious multitasking? Regular meditation could make the work smoother and less stressful, according to new research.

“To our knowledge, this is the first study to explore how meditation might affect multitasking in a realistic work setting,” said co-author Professor David Levy said.

Levy, a computer scientist, and colleague Jacob Wobbrock, a researcher in human-computer interaction, recruited three groups of 12-15 human resource managers for the study.

Before and after each 8-week period, the participants were given a stressful test of their multitasking abilities, requiring them to use email, calendars, instant-messaging, telephone and word-processing tools to perform common office tasks.

Researchers measured the participants’ speed, accuracy and the extent to which they switched tasks. The participants’ self-reported levels of stress and memory while performing the tasks were also noted.

The results published in Proceedings of Graphics Interface, were significant. The meditation group reported lower levels of stress during the multitasking test while those in the control group or who received only relaxation training did not.

When the control group was given meditation training, however, its members also reported lower stress during the test just as had the original meditation group.

The meditation training also seemed to help participants concentrate longer without their attention being diverted. Those who meditated beforehand spent more time on tasks and switched tasks less often, but took no longer to complete the overall job than the others, the researchers learned.

After training, both the meditators and those trained in relaxation techniques showed improved memory for the tasks they were performing. The control group did not, until it also underwent the meditation training.

An antidote to hi-tech havoc

Adds Levy: “We are encouraged by these first results. While there is increasing scientific evidence that certain forms of meditation increase concentration and reduce emotional volatility and stress, until now there has been little direct evidence that meditation may impart such benefits for those in stressful, information-intensive environments.”

Technology makes stressful demands on us, but meditation can help keep us focused