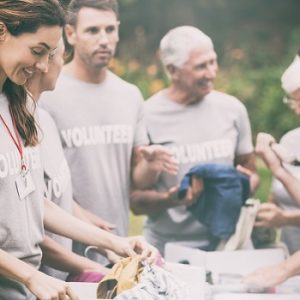 Purpose in life can be cultivated and enhanced through mindfulness, stronger community relationships and through activities such as volunteering. [Photo: Bigstock]

Natural Health News — From drinking warm milk before bed to taking sleeping pills, there’s a world of advice for those struggling to get a good night’s sleep. But new research suggests a completely different approach: find a purpose in life.

Insufficient sleep a significant public health concern. In the US The Centers for Disease Control and Prevention (CDC) estimate that 50 to 70 million people in the United States have a sleep or wakefulness disorder.

Previous research showed having a purpose in life generally improves overall sleep when measured at a single point in time.

What researchers from the Northwestern University Feinberg School of Medicine in Chicago, IL, wanted to know was whether this was also true over a longer period of time. They set out to examine the link between having a sense of purpose in one’s life and the quality of one’s sleep.

Their findings are published in the journal Sleep Science and Practice.

What keeps us awake

» Insufficient sleep a significant public health concern and a growing problem for people of all ages.

» In a study of older individuals researchers looked at two physical conditions that keep us awake: sleep apnea and restless leg syndrome and compared the incidence of these to feelings of not having a purpose in life.

» The startling results showed that those who felt a sense of purpose had a 63% lower chance of developing sleep apnea and a 52% lower risk of restless legs – suggesting a deeper mind-body connection in sleep disturbance than previously thought.

Specifically, they looked at the association between having a sense of meaning and the likelihood of developing sleep apnea and restless leg syndrome (RLS).

Sleep apnea is a common disorder that increases with age in which a person has shallow breathing or pauses in breathing during sleep several times per hour. This disruption often makes a person feel unrefreshed upon waking up and excessively sleepy during the day.

Restless leg syndrome  causes uncomfortable sensations in the legs and an irresistible urge to move them. Symptoms commonly occur in the late afternoon or evening hours and are often most severe at night when a person is resting, such as sitting or lying in bed.

The researchers examined 825 individuals aged between 60 and 100 years, 77% of whom were female and over half of whom were African American.

The participants were asked a series of questions designed to evaluate the quality of their sleep and check for potential symptoms of RLS, as well as for symptoms of random eye movement behaviour disorder.

They were asked a further series of questions designed to evaluate their sense of purpose in life.

Having got the necessary background the participants were then followed for 2 years with regular assessments.

The study revealed that people who felt a sense of purpose had a 63% lower chance of developing sleep apnea and a 52% lower risk of RLS.

Additionally, the researchers found that overall, those with a higher sense of purpose had “moderately better” sleep quality. The results were largely the same across African American and white American study participants, so the findings have important implications for the US at large.

“Helping people cultivate a purpose in life could be an effective drug-free strategy to improve sleep quality, particularly for a population that is facing more insomnia,” said senior author Jason Ong, an associate professor of neurology at Northwestern University Feinberg School of Medicine. “Purpose in life is something that can be cultivated and enhanced through mindfulness therapies.”

It can also be cultivated through building stronger community relationships and through activities such as volunteering or, for older people, continuing useful work beyond retirement age.

Although the participants in the study were older, researchers said the findings are likely applicable to the broader public as well.

Purpose in life can be cultivated and enhanced through mindfulness, stronger community relationships and through activities such as volunteering. [Photo: Bigstock]