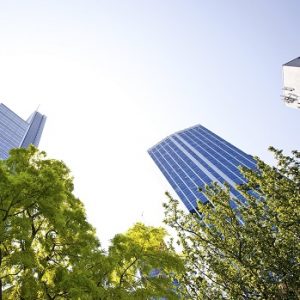 Strategically sited trees in cities throughout the UK could make the aire more breatheable for all. [Photo: Bigstock]

Plant more trees in the city to reduce pollution

Natural Health News — Trees in cities throughout the UK could be significantly improving the quality of the air we breathe by decreasing pollution levels for pedestrians.

The research team from the university of Leicester looked at ways trees could help to reduce air pollution in cities and the study, published in the journal Atmospheric Environment, focused on the city of Leicester, where up to 90% of some atmospheric pollutants such as nitrogen dioxide (NO2) are emitted by traffic.

» Research shows that trees – depending on where they are planted – can both trap and disperse this pollution.

» A new study suggests that even if trees can trap pollution in some areas – this effect is outweighed by the fact that trees disperse pollution at street/ pedestrian level.

PhD researcher Antoine Jeanjean from the University of Leicester’s Department of Physics and Astronomy who led the research said his team focused on the city centre of Leicester where there is a high density of buildings and traffic in order to find ways of accurately measuring air pollution in cities.  “Predicting the concentration of air pollutants is essential for monitoring air quality in cities.” he said.

While previous modelling exercises have suggested that trees trap pollution by constricting wind flow in ‘street canyons’ (built up areas with rows of tall buildings), the researchers found this was not always the case.

The researchers found that while trees can decrease the wind speed over the city, thereby trapping pollution in some locations, at the same time they produce more turbulence that helps in dispersing the pollution emitted by traffic, resulting in lower exposure for the public by an average of 7% at pedestrian height.

In addition to the increased dispersion of pollution by trees, there are other well known benefits of urban trees such as reduced stress, noise suppression and chemical and physical removal of certain pollutants.

Plants in towns and cities have been shown to remove nitrogen dioxide (NO2) and particulate matter (PM), both of which are harmful to human health. Other evidence suggests that in areas where ‘street canyons’ are common green walls can help with the remove up to 30% of airborne pollutants. This suggests that city planners need to pay careful – and more strategic – attention to the ‘green infrastructure’ our our urban areas in order to best protect our health.

Strategically sited trees in cities throughout the UK could make the aire more breatheable for all. [Photo: Bigstock]