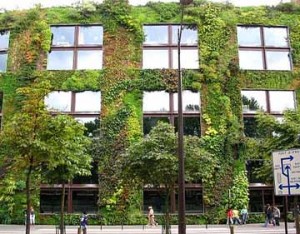 Plants are the best ‘green technology’ for reducing city pollution

Natural Health News — Trees, bushes and other greenery growing in the concrete-and-glass canyons of cities can reduce levels of two of the most worrisome air pollutants by eight times more than previously believed, a new study has revealed.

In a report published in the American Chemical Society journal Environmental Science & Technology researchers at Lancaster University in the UK explain that concentrations of nitrogen dioxide (NO2) and microscopic particulate matter (PM) – both of which can be harmful to human health – exceed safe levels on the streets of many cities.

Past research suggested that trees and other green plants can improve urban air quality by removing those pollutants from the air. However, the improvement seemed to be small, a reduction of less than 5%.

The new study sought a better understanding of the effects of green plants in the sometimes stagnant air of city streets, which the authors term “urban canyons.”

The study concluded that judicious placement of grass, climbing ivy and other plants in urban canyons can reduce the concentration at street level of NO2 by as much as 40% and PM by 60%, much more than previously believed.

The reduction in particulate matter, that is fine particles of between 2.5 and 10 micrometers in diameter, is particularly welcome.

These fine particles of pollution are so small that they can lodge deep into the lungs and cause serious illness. Numerous scientific studies have linked particle pollution exposure to a variety of problems, including:

People with heart or lung diseases, children and older adults are the most likely to be harmed by particle pollution exposure.

Apart from ensuring our cities have plenty of green space, the authors go so far as to suggest building plant-covered “green billboards” in these urban canyons to increase the amount of foliage. Trees were also shown to be effective, but only if care is taken to avoid trapping pollutants beneath their crowns.