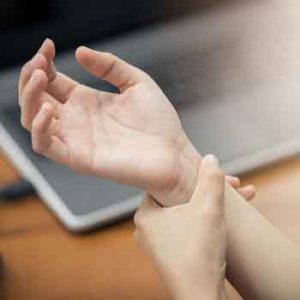 Electroacupuncture can enhance the effectiveness of night-splinting and provide relief from carpal tunnel symptoms. [Photo: Bigstock]

Natural Health News — Electroacupuncture combined with nighttime splinting may help relieve the pain from chronic carpal tunnel syndrome, according to a new study.

Carpal tunnel syndrome (CTS) is a condition that causes a tingling sensation, numbness and sometimes pain in the hand and fingers. It is common during pregnancy and in those with diabetes and arthritis.

Usually, these uncomfortable sensations, which are  caused by compression of the media nerve which controls sensation and movement in the hands, develop gradually and can be worse during the night. They tend to affect the thumb, index finger and middle finger.

» Carpal tunnel syndrome is a condition that produces uncomfortable tingling sensations in the hand. It is common during pregnancy and in those with arthritis and diabetes and can be worse at night.

» Steroid injections and/or night splints are the usual recommended treatment for this condition.

» New research, however suggests that a combination of electroacupuncture with night splints provided better relief over a relatively short period of 17 weeks.

The study published in CMAJ (Canadian Medical Association Journal), compared the use of electroacupuncture and night splinting to splinting alone in relieving mild to moderate pain from carpal tunnel syndrome over 17 weeks.

Patients were randomly assigned to the two groups, and of the 181 who started, 174 completed the study. They reported pain based on a symptom scale commonly used to assess pain from carpal tunnel syndrome.

Patients who received electroacupuncture combined with nighttime splinting reported better symptom relief at 5 and 17 weeks than the control group. The study also showed that splinting alone did not alleviate pain or improve function.

The researchers concluded that electroacupuncture combined with nocturnal splinting has the potential to provide some relief to patients with chronic mild to moderate discomfort from carpal tunnel syndrome.

Electroacupuncture can enhance the effectiveness of night-splinting and provide relief from carpal tunnel symptoms. [Photo: Bigstock]