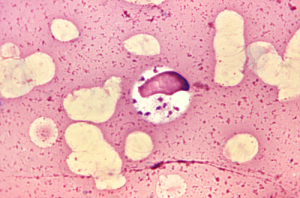 Leishmaniasis, caused by the Leishmania parasite, is one of the most important parasitic diseases after malaria.

Natural Health News — Scientists have discovered that bombarding a tropical parasite with drugs has not only made it more resistant to medicine, it has made it more lethal as well.

According to a statement from the Institute of Tropical Medicine (ITG) medical practice helped in developing yet another superbug, increasing its resistance against drugs, but also against the human immune system.

“To our knowledge it is the first time such a doubly armed organism appears in nature”, says researcher Manu Vanaerschot, at Antwerp University. “It certainly makes you think.”

Vanaerschot studies the Leishmania parasite, a unicellular organism that has amazed scientists before. Leishmania is an expert in adaptation to different environments.

The parasite causes leishmaniasis, one of the most important parasitic diseases after malaria. It affects some two million people, in 88 countries – including European ones – and yearly kills fifty thousand of them.

The parasite is transmitted by the bite of a sand fly. The combined resistance against a medicine and the human immune system has emerged in Leishmania donovani, the species causing the deadly form of the disease.

On the Indian subcontinent, where most cases occur, the disease was treated for decades with antimony compounds. As was to be expected, the parasite adapted to the constant drug pressure, and evolved into a form resistant to the antimonials.

In 2006 the treatment was switched to another medicine, because two patients out of three did not respond to the treatment. What is more the parasite in addition to becoming resistant to the drug, also became resistant to the macrophages of its host. Macrophages are important cells of our immune system. This means the bug is not only more resilient it is also more virulent.

Generally resistance is only of advantage to pathogens in a drug-filled environment. Outside that environment it can be a burden to the organism since it has to carry a trait for which it has no real use. The scientists describe it as being like a suit of armour – useful on the battle field, but a real nuisance the rest of the time.

Depressingly, the scientists recommend that the answer is to develop newer and stronger medicines to fight the bug, describing the situation as a “never-ending arms race”.

This story comes at a time when science has found a new, unknown pathogen has been found in genetically modified crops (which are heavily sprayed with pesticides) and in many ways is a parallel story of what happens when we try to outsmart ‘bugs’ – that is viruses, bacteria and fungi – with chemicals.

To echo the scientists’ view – it certainly makes you think.

Leishmaniasis, caused by the Leishmania parasite, is one of the most important parasitic diseases after malaria.