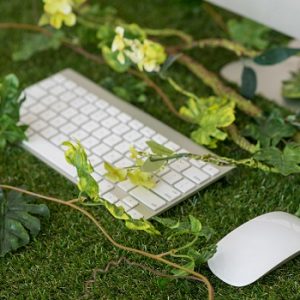 Keep the windows open and levels of toxins down to keep your office working well. [Photo: Bigstock]

Natural Health News — Working in a clean, green office gives you a boost in brain power, new research has revealed.

People who work in well-ventilated offices with below-average levels of indoor pollutants and carbon dioxide (CO2) think significantly better in crucial areas such as responding to a crisis or developing strategy – than those who work in offices with typical levels, say US researchers.

The findings published in Environmental Health Perspectives suggest that the indoor environments in which many people work daily could be adversely affecting cognitive function – and that, conversely, improved air quality could greatly increase the cognitive function performance of workers.

» Constructing buildings to be air-tight against the weather, means we trap more indoor pollutants inside.

» Breathing in a mixture of chemicals and carbon dioxide, alongside a lack of fresh air, can impact how effectively our brains function.

» This research suggests that the brain functions, in areas such as crisis management and strategy, of those working in ‘green’ offices are are double those of people working in more polluted environments.

Researchers wanted to look at the impact of ventilation, chemicals, and carbon dioxide on workers’ cognitive function because, as buildings have become more energy efficient, they have also become more airtight, increasing the potential for poor indoor environmental quality.

Building-related illnesses and “sick building syndrome” were first reported in the 1980s as ventilation rates decreased.

In response, there has been an emphasis on sustainable design – “green” buildings that are energy efficient and are also designed to enhance indoor environmental quality. The researchers designed this study to identify the specific attributes of green building design that influence cognitive function, an objective measure of productivity.

Over a six day period, they studied 24 people – including architects, designers, programmers, engineers, creative marketing professionals, and managers in a controlled environment.

On average the cognitive performance of those who worked in a green+ environment was double that of participants who worked in conventional environments; scores for those working in green environments were 61% higher. Measuring nine types of cognitive response, researchers found that the largest improvements occurred in the areas of:

In addition, when researchers looked at the effect of CO2 – not normally thought of as a direct indoor pollutant – they found that, for seven of the nine cognitive functions tested, average scores decreased as CO2 levels increased to levels commonly observed in many indoor environments.

“We have been ignoring the 90%. We spend 90% of our time indoors and 90% of the cost of a building are the occupants, yet indoor environmental quality and its impact on health and productivity are often an afterthought,” said Joseph Allen, assistant professor of exposure assessment science, director of the Healthy Buildings Program at the Harvard Center for Health and the Global Environment, and lead author of the study.

“These results suggest that even modest improvements to indoor environmental quality may have a profound impact on the decision-making performance of workers.”

Keep the windows open and levels of toxins down to keep your office working well. [Photo: Bigstock]