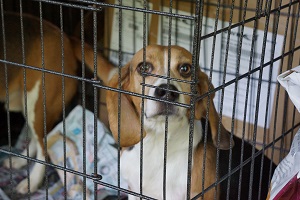 Approximately 90,000 dogs are used each year in toxicity testing across the EU and the US

Drugs tests on dogs are unreliable – so why use them?

A recent re-analysis of past research using dogs has cast serious doubt on their validity as a test model for human drug development by the pharmaceutical industry.

In spite of dogs being the preferred second species for testing, after initial rodent experiments, this new study has shown that they are an unreliable indicator of whether substances will be safe for humans.  In fact, in some cases their prediction success is little better than by chance.

Laws all over the world currently require animal experiments prior to clinical trials taking place on humans to ensure that drugs are safe.  If two species are required, as is the case in Europe and the USA, then, usually it is a dog study.

FRAME (Fund for the Replacement of Animals in Experiments) and the BUAV (British Union for the Abolition of Vivisection) undertook the most comprehensive analysis to date of the predictive value of the dog as a non-human animal model for toxicity testing in humans.

They asked whether the use of dogs contributes significant weight to the evidence for or against dog studies predicting the toxicity of a given compound in humans.  The authors believe that the findings of the paper show that canine models are highly inconsistent predictors of toxic responses in humans.

The study has implications for the pharmaceutical industry. Approximately 90,000 dogs are used each year across the EU and the US, and about 80% of this use is as the non-rodent “second species” in the evaluation of pharmaceutical safety and efficacy.  Normal practice is that compounds are first tested on rats or mice, then on dogs to make further assessments, but if the dog results add no reliable information there are potentially two types of failure. There is a risk that potentially useful medicinal compounds will be wrongly discarded, because of ‘false positives’, while others could find their way into human tests, and then fail in clinical trials.

An estimated 92-94 % of drugs that pass preclinical tests fail in human clinical trials, and around half of those that do pass are later withdrawn or relabelled because of adverse effects not predicted by animal tests. The failure rate is costly, both to the pharmaceutical industry and in terms of human safety and animal welfare.

In a paper to be published in FRAME’s scientific journal ATLA (Alternatives to Laboratory Animals) the authors share the concern that many animal experimental results/preclinical data remain unpublished and/or proprietary.  The authors encourage the pharmaceutical industry and other stakeholders to conduct further analyses using their proprietary data and/or to facilitate such investigations by making available anonymised data.

According to the paper: ‘A comprehensive suite of more reliable alternative methods is now available. Combined with considerable public concern over the use of dogs in science, the high ethical costs of doing so, given the sensitive nature of dogs and the expressed desire for the use of dogs as a second species in drug testing to have a scientific, rather than a habitual basis, we conclude that preclinical testing of pharmaceuticals in dogs cannot currently be justified on scientific or ethical grounds.’

FRAME and the BUAV hope these findings will encourage the pharmaceutical industry and other stakeholders to engage fully in constructive discussion and debate and to increase the search for more reliable testing methods not involving the use of animals.

Approximately 90,000 dogs are used each year in toxicity testing across the EU and the US