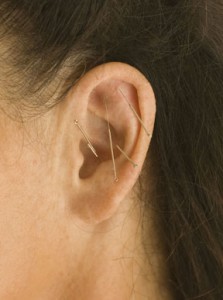 Auricular acupuncture therapy is based on the understanding that the outer ear represents all parts of the body. It was first used in France in 1956 by Dr Paul Nogier who noticed that a patient’s back-ache was cured after s/he sustained a burn on the ear.

Since then the approach has been used to treat drug addiction and help people give up smoking and lose weight.

The Korean researchers compared acupuncture of five points on the outer ear: shen-men (divine gate); spleen, stomach, hunger, and endocrine – and on just one point (hunger) – with sham treatment on 91 overweight adults (BMI of 23 or more).

Participants were asked to follow a restrictive (although not weight loss) diet and not to take any extra exercise during the eight week period of their treatment.

Thirty one people were randomly assigned to the five point treatment, which involved the insertion of acupuncture needles 2mm deep into the outer ear. These were kept in place with surgical tape for a week, after which the same treatment was applied to the other ear, with the process repeated over eight weeks.

Another 30 people were assigned to the same treatment process, but at just the one hunger point. A further 30 were given sham treatment – with the same process and timescales, but with the removal of the needles immediately after insertion.

BMI, waist circumference, body fat mass, percentage body fat, and blood pressure were all measured at the start and end of treatment, and four weeks in, to see what impact acupuncture might have.

Twenty four people dropped out before the eight weeks were up, 15 of whom were in the sham treatment group, suggesting that perhaps they found it harder to regulate their desire to eat and cope with the restrictive diet, say the authors.

Waist circumference fell, with the largest drop seen in the group on the 5-point treatment compared with the sham groups, although this difference disappeared after taking account of age.

Measures of body fat also fell after eight weeks, but only in those receiving the 5-point treatment. There were no significant differences in blood pressure among the groups.

The authors conclude that both five and one point approaches can help treat overweight, but that the five point approach may be more appropriate for tackling abdominal fat.