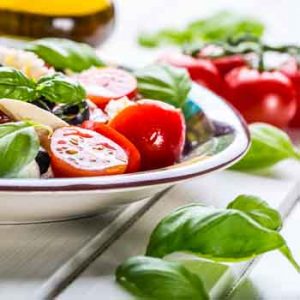 The combination of healthy foods in Mediterranean style eating could help protect your brain into old age. [Photo: Bigstock]

Natural Health News — Want to stop you brain shrinking – and possibly lower your risk of dementia – as you age? Pay attention to how you eat.

A new study shows that older people who followed a Mediterranean-style diet retained more brain volume over a three-year period than those who did not follow the diet as closely. The study is published in the journal Neurology.

Researchers gathered information from a larger study on the eating habits of nearly 1000 Scottish people around age 70 who did not have dementia. From this group they followed 401 who had an MRI brain scan around age 73 to measure overall brain volume, grey matter volume and thickness of the cortex (the outer layer of the brain).

That group then returned for a second scan at age 76. These measurements were compared to how closely participants followed the Mediterranean diet.

» Eating a Mediterranean diet is associated with many health benefits. A new study suggests that one of these may be related to cognitive health.

» Amongst a group of elderly individuals in Scotland, those who closely adhered to a Mediterranean way of eating experienced less brain shrinkage over a 3 year period than those who did not.

Sticking to the diet plan

The participants varied in how closely their dietary habits followed the Mediterranean diet principles, which include large amounts of fruits, vegetables, olive oil, beans and cereal grains such as wheat and rice, moderate amounts of fish, dairy and wine, and limited red meat and poultry.

Those who didn’t follow this dietary pattern closely were more likely to have a higher loss of total brain volume over the three years than people who followed the diet more closely. The difference was small but significant enough for the Mediterranean diet to be considered as beneficial for the brain’s health.

The benefits remained even after researchers adjusted for other factors that could affect brain volume, such as age, education and having diabetes or high blood pressure.

There was no relationship between grey matter volume or cortical thickness and the Mediterranean diet.

A synergy of healthy foods

Contrary to some research findings on the Mediterranean diet, the findings suggest that reduced brain shrinkage is not specifically linked to low intake of meat and high intake of fish. The authors suggest – and others agree – that the cognitive and other health benefits of the Mediterranean diet come from a kind of synergistic effect of all its components rather than from single foods.

“It’s possible that other components of the Mediterranean diet are responsible for this relationship, or that it’s due to all of the components in combination,” said lead researcher Michelle Luciano, PhD, of the University of Edinburgh in Scotland.

The study also finds that subjects across the spectrum of intellect and educational attainment reaped the benefits of a Mediterranean-type diet in reducing brain shrinkage. An important finding since better brain health is often linked to these things only.

The study didn’t specifically look at risk of dementia, though brain shrinkage is one risk factor for this disease.

Our brains begin to reduce in size from early adulthood as we naturally start to lose nerve cells and the connections between them. This shrinking accelerates as people reach old age and can result in some increased difficulty with certain aspects of memory and thinking. This natural loss of nerve cells is somewhat different to the much quicker, more severe brain-shrinkage associated with diseases like Alzheimer’s.

That shrinkage, however, may be linked to a lifetime of Western Pattern eating, as a 2013 study suggests.

This brings up yet another question left unexplored by the study: could a greater percentage of brain shrinkage could be prevented if we ate healthier diets for longer? Other studies do suggest that when it comes to protecting health through diet, earlier is better.

For example, another 2013 study of more than 10,000 women, found that those who followed a Mediterranean-style diet in their 50s and 60s were about 40% more likely to live past the age of 70 without chronic illness and without physical or mental problems than were those with less-healthy diets.

The combination of healthy foods in Mediterranean style eating could help protect your brain into old age. [Photo: Bigstock]