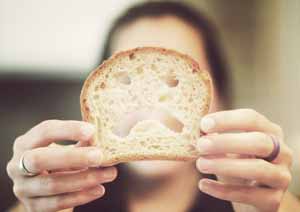 Natural Health News — Can you be sensitive to gluten and not have coeliac diseaese?

That is a question that researchers from the US National Institutes of Health set out to answer recently .

Many in the medical profession believe that coeliac disease is the only true gluten sensitivity disorder.  But nutritionists – and patients often see things differently.

In a small but well conducted study, researchers looked at 59 patients who weren’t diagnosed with coeliac disease or a wheat allergy but who believed gluten-containing food was causing them intestinal problems. Half were randomly given either less than 5 grams of gluten or a placebo of rice starch in pill form. After a week the participants switched pills.

After only one week, those who were taking the gluten pills reported a significant difference in symptoms compared to those who took non-gluten placebo pills. On top of intestinal pains, they felt abdominal bloating, a foggy mind, depression, and stomach ulcers.

In addition, they found that when switching the groups around, participants’ suspected non-coeliac gluten sensitivity became worse with symptoms ‘increasing significantly’ during the one week of gluten intake, compared with their week on the rice starch.

Increasingly, gluten sensitivity is being seen part of a broad spectrum, with coeliac disease on one end and mild gluten sensitivity on the other. Many people fall somewhere in the middle, testing negative through traditional blood tests for coeliac disease, but still experiencing silent inflammation and other harmful effects from eating wheat. They may even be asymptomatic or suffer only non-GI symptoms like my patient with migraines.

In medicine, this condition is now being called Non-Coeliac Gluten Sensitivity, or NCGS, which refers to patients who have gluten-related symptoms but not celiac disease or wheat allergy.

The science on NCGS is ever-evolving because it’s become a rapidly diagnosed condition that’s largely existed below the radar, according to the National Foundation for Celiac Awareness.

The symptoms may appear anywhere from hours to days after ingesting gluten. NCGS patients may have GI and/or non-GI symptoms, and even though doctors may not yet agree about possible gluten sensitivity, these individuals usually improve on a gluten-free diet.