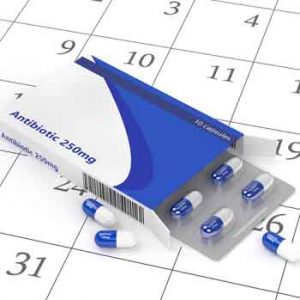 Broad-spectrum antibiotics were the ones most linked to the development of food allergies in young children. [Photo: Bigstock]

Natural Health News — Antibiotic treatment within the first year of life may wipe out more than an unwanted infection.

Early exposure to these powerful drugs is associated with an increase in food allergy diagnosis, new research from the University of South Carolina suggests.

The researchers from the College of Pharmacy, School of Medicine and Arnold School of Public Health used South Carolina Medicaid administrative data from 2007 to 2009 to identify children with food allergies and compared these to a control group taken from the same dataset, who had no food allergies.

» Studies show that normal gut flora is critical for developing the body’s tolerance to foreign proteins such as food.

» A new study by US researchers has shown that children who receive antibiotics in the first year of life are significantly more likely to develop food allergies.

» This is because antibiotics kill good bacteria in the body along with any harmful bacteria.

» The risk increased with the number of antibiotic prescriptions a child had and was much greater in those children who received broad-spectrum antibiotics as opposed to the more targeted ones.

Even after adjusting for factors including birth, breastfeeding, asthma, eczema, maternal age and urban residence, they found that children prescribed antibiotics within the first year of life were 1.21 times more likely to be diagnosed with food allergy than children who hadn’t received an antibiotic prescription.

The interdisciplinary research team, led by Bryan Love, Pharm.D., found that the strongest association was in children who were prescribed cephalosporin and sulfonamide antibiotics, which are broad-spectrum antibiotics, compared with narrower spectrum agents such as penicillins and macrolides. The study was published recently in the journal Allergy, Asthma & Clinical Immunology.

This research builds upon previous studies finding that normal gut flora is critical for developing the body’s tolerance to foreign proteins such as food.

Antibiotics are known to alter the composition of gut flora, and US children aged three months to three years are prescribed 2.2 antimicrobial prescriptions per year on average, according to the literature.

In the UK doctors are writing 10 million needless antibiotic prescriptions each year. Across Europe prescription rates for children under the age of 4 are higher than for any other age group.

The study’s results suggest a potential link between the rise in antibiotic prescriptions for young children and the rise in diagnosis of food allergies in children.

Given the study’s findings and the body of research suggesting that antibiotics are frequently improperly prescribed to treat viral infections, Love said that prescribing medical professionals should be cautious before ordering antibiotics for young children but noted that it can be difficult to distinguish between viral and bacterial infections.

“We need better diagnostic tools to help identify kids who truly need antibiotics,” he said. “Overusing antibiotics invites more opportunity for side effects, including the potential development of food allergies, and can encourage antibacterial resistance.”

Broad-spectrum antibiotics were the ones most linked to the development of food allergies in young children. [Photo: Bigstock]