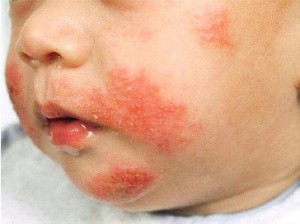 Childhood eczema linked to antibiotic use

Natural Health News — Children who take antibiotics in their first year of life were significantly more likely to develop eczema, according to a new review.

Experts said the new study supports the idea that antibiotics destroy intestinal microbes that play an important role in the immune system’s development after birth.

Previous research had suggested that early life exposure to antibiotics may lead to an increased risk for eczema, but the new review is the first to consolidate available results from several studies.

Researchers led by Dr. Teresa Tsakok of Guy’s and St. Thomas’ Hospital NHS Foundation Trust in London, analysed the results of 20 studies of antibiotic use, involving children and young adults aged up to 25, who were exposed to antibiotics either prenatally or in the first year of life, in connection with later skin problems.

The study, published in the British Journal of Dermatology found no link between prenatal antibiotic exposure and eczema, but exposure to the drugs in the first year of life increased the risk for the disease by up to 40%.

The more antibiotics a baby took, the higher the risk. Thus with each additional course of antibiotics may increase the risk of eczema by a further 7%. Broad-spectrum antibiotics, like amoxicillin, appeared to have the strongest effect.

Said Dr Tsakok, “One potential explanation is that broad-spectrum antibiotics alter the gut microflora and that this in turn affects the maturing immune system in a way that promotes allergic disease development.”

Is diet the link?

Eczema is a chronic inflammatory skin disease. Atopic eczema is the most common form of the disease and mainly affects children, but can follow on later in life or even develop in adulthood. Around 80% of atopic eczema cases develop by 5 years of age, many occurring by the age of one.

The incidence of eczema and other allergic diseases has increased over the years, especially for children in high-income countries. Like most atopic diseases eczema can run in families. But predisposition is only part of the picture.

A recent study found that kids are more likely to develop eczema if they eat fast food 3 or more times a week. Specifically the results, taken from the International Study of Asthma and Allergies in Childhood (ISAAC) Phase Three found that three or more servings of fast food per week were associated with a 39% elevated risk of severe asthma among teens and a 27% increased chance among younger children, as well as to the severity of rhinitis and eczema, overall.

Fruit, however was protective. Consuming fruit 3 or more times per week was associated with a reduction in the severity of symptoms of 11% among teens and 14% among younger children.

Similarly, a previous study demonstrated that the benefits of breastfeeding, which can help establish healthy gut flora and protect against atopic disorders, such as asthma, are cancelled out by eating fast food once or twice a week.