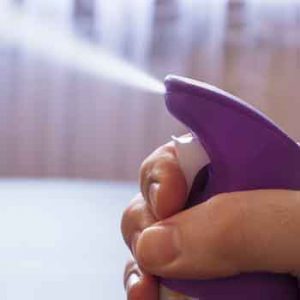 Fragrance sensitivity is a growing problem in our society. [Photo: Bigstock]

More of us are avoiding perfumed people – and places

Natural Health News — If you find yourself reeling from the smell of air fresheners and heavy perfumes you are not alone.

The survey of more than 1100 representative adults in the US also found that businesses that ‘perfume’ their premises could be losing money:  more than 20% of the survey respondents said that they left premises as quickly as possible if they smelled air fresheners or some fragranced product.

A problem at work

The study found that in the workplace, over 15% of the population lost workdays or a job due to fragranced product exposure. Over 50% of those surveyed said they would prefer fragrance-free workplaces. And over 50% would prefer that health care facilities and professionals were fragrance-free.

The research was conducted by Professor Anne Steinemann, from the University of Melbourne School of Engineering, is published in the journal Air Quality, Atmosphere & Health.

» A new survey shows that a significant percentage of the population in the US avoids products – and premises – where fragranced products are used.

» A this is because these individuals report a number of sensitivity reactions to fragranced products.

» The problem of fragrance sensitivity -most of which is linked to synthetic fragrances – is on the rise in the US and elsewhere and businesses and workplaces are well advised to put into place fragrance-free policies to protect people’s health.

When exposed to fragranced products, 34.7% said they suffer adverse health effects, such as breathing difficulties, headaches, dizziness, rashes, congestion, seizures, nausea, and a range of other physical problems. For half of these individuals, effects are potentially disabling, as defined by the Americans with Disabilities Act.

“This is a huge problem; it’s an epidemic,” says Professor Steinemann.

Professor Steinemann is especially concerned with involuntary exposure to fragranced products, or what she calls “secondhand scents.” She found over 20% said they suffer health problems around air fresheners or deodorisers, and over 17% can’t use public restrooms that have air fresheners. In addition, over 14% said they wouldn’t wash their hands with soap if it was fragranced.

Over 12% of those surveyed experience health problems from the scent of laundry products vented outdoors, over 19% from being in a room cleaned with scented products, and over 23% from being near someone wearing a fragranced product.

More generally, over 22% of Americans surveyed can’t go somewhere because exposure to a fragranced product would make them sick.

For instance, a growing number of lawsuits under the Americans with Disabilities Act concern involuntary and disabling exposure to fragranced products.

Fragranced consumer products sold in the US (and other countries) are not required to list all ingredients on their labels or material safety data sheets. Nearly two-thirds of the population surveyed were not aware of this lack of disclosure,

Professor Steinemann suggests using products that do not contain any fragrance (including masking fragrance, which unscented products may contain). She also recommends fragrance-free policies within buildings and other places.

“It’s a relatively simple and cost-effective way to reduce risks and improve air quality and health,” she explains.

The majority of fragrances used in cleaning supplies, air fresheners, and personal care products are synthetic fragrances – 95% of which are derived from petrochemicals. Fragrances derived from essential oils don’t trigger the same extreme responses.

Fragrance sensitivity is a growing problem in our society. [Photo: Bigstock]