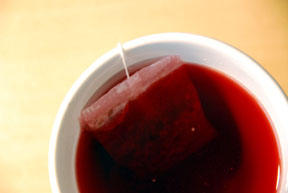 The health benefits of herbal teas

These days there is a lot of talk about health benefits from drinking tea.

Green, black, and oolong are the ones most of us know about; each has measurable levels of healthy antioxidants and each comes from the age-old Camellia sinensis bush. And then there are herbal teas – infusions derived from a wide variety of plants that have nothing to do with C. sinensis – which are increasingly popular with people looking for a healthy brew, minus the caffeine.

According to a recent review in Agricultural Research magazine,  some herbal teas also have demonstrable benefits.

There is surprisingly little clinical evidence on the effects herbs taken in a dilute form as teas. But researchers Diane McKay and Jeffrey Blumberg at the Jean Mayer USDA Human Nutrition Research Center on Aging, at Tufts University in Boston, Massachusetts have been looking into science-based evidence of herbal infusions and have found health benefits from drinking three of the most popular herbal teas. Their work is funded in part by Celestial Seasonings, manufacturers of a variety of herbal teas.

One popular herbal, chamomile tea, has long been considered a soothing brew. In the early 20th century, it was mentioned in a classic children’s book about a little rabbit named Peter. At the end of a rough day, Peter’s mum served him some chamomile tea. Interestingly, when Blumberg and McKay reviewed scientific literature on the bioactivity of chamomile, they found no human clinical trials that examined this calming effect.

They did, however, find healthful effects beyond sedation. In their 2006 review published in the journal Phytotherapy Research they describe laboratory evidence that chamomile tea has moderate antioxidant and antimicrobial activities and significant anti-platelet-clumping activity (platelets assist with blood clotting; however when they ‘clump together’ in abnormal numbers this is a risk for blood clots).

In addition, the review found that animal feeding studies have shown that chamomile has a potent anti-inflammatory action and some cholesterol-lowering activity.

However, in test tube studies, peppermint has been found to have significant antimicrobial and antiviral activities, strong antioxidant and anti-tumor actions and some anti-allergenic potential. When animals were fed either moderate amounts of ground peppermint leaves or leaf extracts, a relaxation effect on gastrointestinal tissue and an analgesic and anaesthetic effect in the nervous system was noted.

Both McKay and Blumberg have concluded that the available research on herbal teas is compelling enough to suggest clinical studies and in 2010 Diane McKay led a small human clinical trial to test whether drinking hibiscus tea affects blood pressure, published in the Journal of Nutrition. In it she tested 65 volunteers, aged 30 to 70 years, who were pre- or mildly hypertensive.

Blood pressure readings of 120/80 or greater are considered a risk factor for heart disease, stroke and kidney disease.

For six weeks, about half the group was randomly selected to drink three cups of hibiscus tea daily. The others drank a placebo beverage containing artificial hibiscus flavouring and colour.

All participants were advised to follow their usual diet and maintain their normal level of activity. Before the start of the study, blood pressure was measured twice – 1 week apart – and at weekly intervals thereafter.

The findings showed that the people who drank hibiscus tea had a 7.2-point drop in their systolic blood pressure (the top number), and those who drank the placebo beverage had a 1.3-point drop.

The data, says McKay, “supports the idea that drinking hibiscus tea in an amount readily incorporated into the diet may play a role in controlling blood pressure, although more research is required”.