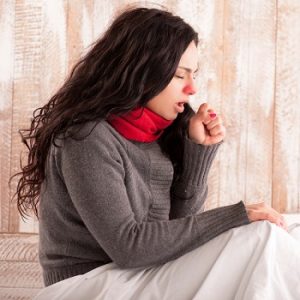 Essential oils are a simple and affordable treatment to soothe the throat, break up mucous and reduce inflammation. [Photo: Bigstock]

Q&A: What are the best essential oils for coughs?

Q — I’ve been left with a lingering cough after a bout of flu. Can you recommend any essential oils that might help calm things down?

A – For the last couple of years the prevailing strain of flu has brought with a deep, sometimes distressing cough that lingers long after most symptoms have cleared up.

Many common essential oils can help if you have a cough. They can be used as inhalations, or diluted into a base oil and used for massage or as a chest rub, or added to a warm bath, or a bowl of hot water to make an effective steam inhalation. When you are on the go, you can add a few drops to a tissue or hankie, keep this in a plastic bag to use whenever you feel congested to help open your airways.

While it’s worth consulting a healthcare practitioner if coughs linger far too long, essential oils are a simple and affordable treatment and have several properties that can soothe the throat, break up mucous and reduce inflammation.

We have heard of several cases where people have succumbed to this year’s flu more than once and so making use of the anti-bacterial benefits of essential oils, for instance by using them in diffusers to clean and disinfect the air, is also a good way to get the most out of them.

Here is our choice of effective essential oils to help treat coughs:

The eucalyptus or blue gum tree is indigenous to Australia and was used medicinally by the Aborigines. It is now cultivated in North Africa, Spain, California and India, as well as Australia. Its main active ingredient is cineole, which has an antimicrobial effect that can help fight off bacteria that cause illnesses. It also has an anti-inflammatory action that helps to break up mucus, relieve pain, and ease the muscle tension that often accompanies a cold or flu.

While it has a slightly medicinal aroma, eucalyptus is widely recognized for its ability to treat coughs and associated respiratory ailments like pharyngitis, bronchitis, and sinusitis.

The cinnamon tree is a native of east India and Indonesia. The inner bark of the young twigs, sold as cinnamon sticks, has been used in cooking and as a medicine for thousands of years.

Cinnamon, has a reassuring, spicy aroma and has also been shown be a powerful anti-bacterial. A recent review concluded that cinnamon has multiple medicinal properties including the ability, when inhaled, to stop the bacteria that cause respiratory illness from reproducing. To get the most from inhalations try using in a diffuser or as a steam inhalation.

A native of the Mediterranean countries, rosemary is now grown all around the world. It is a classic culinary herb and has also been used as a medicinal and a sacred herb for thousands of years. Its main active component is rosmarinic acid which, in addition to being, anti-inflammatory – thus helping to relax the muscles in your trachea – is also antiviral and antibacterial. Used on the skin, for instance in a chest rub or massage, it has a warming and head-clearing effect.

One small 2011 study found that a spray containing eucalyptus, peppermint, oregano and rosemary essential oils was able to improve symptoms of upper respiratory ailments in those who used it.

The cheerful flowers of the chamomile plant are familiar to most people.

Both Roman chamomile (Anthemis nobilis) and German chamomile (Matricaria recutita) are known for their calming, soothing properties.  While they have similar actions and are often used interchangeably, studies tend to concentrate on one or the other with German chamomile the more widely used and studied.

Both types of chamomile essential oil contain the powerful anti-inflammatories: bisabolol and apigenin. Both substances work to reduce inflammation, fever and pain in a similar way to NSAIDS like paracetamol. German chamomile has been shown to have anti-inflammatory properties. Roman chamomile has been shown to help soothe part of the lungs called the bronchus to relax as well as relieve coughing.

Chamomile is anti-inflammatory and anti-viral and there is evidence that steam inhalations with chamomile extract can be helpful in relieving upper and middle respiratory tract congestion. The chamomile acted quickly (within 15 minutes) and the benefits lasted 2-3 hours.

Named after the Italian city of Bergamo, these oranges have a very sour fruit with a deeply scented rind the distinctive aroma of which is used as an ingredient in Earl Grey tea and eau de cologne. When inhaled it has a cooling, refreshing effect. It can also help relieve fever and headaches and has an antidepressant effect that can help balance moods and ease anxiety when you are ill.

The essential oil contains the active substance camphene, which is also found in nutmeg and cypress oils and which, studies show, acts as an expectorant. Bergamot oil is anti-microbial and has been shown to inhibit the growth of bacteria, viruses, and fungi.

This popular herb is a hybrid of other types of mint cultivated throughout the world. It has been used as a medicinal herb for thousands of years, particularly to aid breathing and digestion. Peppermint contains a substance called menthol which is often used in commercial chest rubs and can help relieve stuffy or blocked noses, and make breathing easier.

In an essential oil burner or as a steam inhalation or chest rub it has expectorant, antispasmodic and decongestant properties to aid coughs, asthma, bronchitis and sinusitis, flu and head colds.

One study in healthy found that in those who consumed peppermint in a drink, it helped to relax the bronchial muscles which may explain why the oil appears to ease breathing in people with coughs. So consider adding peppermint tea to you healing regimen.

Many are surprised to learn that geranium oil is produced from the leaves, not the flower, of this familiar plant. Geranium essential oil has an overall cooling, balancing effect and is useful for lifting low moods. Studies show it is also useful for easing infections in the upper respiratory tract, including bronchitis.

In one review, which looked at the benefits of several herbs for coughs, geranium was found to be superior to placebo in alleviating the frequency and severity of patients’ cough symptoms; it also helped improve patients’ moods. Geranium also has antibacterial properties that make is a useful room disinfectant a bout of cold or flu.

An aromatic shrub native to the Mediterranean region, lavender has a long history of use as a medicine and its sweet, calming aroma is recognised the world over. It has sedative properties that aid restful sleep and mild analgesic properties make it good for easing headaches and migraine. It is also an effective antispasmodic that can help ease any kind of spasmodic cough.

Lavender is also an anti-inflammatory that can help soothe inflamed bronchi. This alongside its natural sedative and anti-inflammatory characteristics may benefit those with respiratory symptoms, including asthma. For example, one study found that lavender oil inhalation inhibited airway resistance caused by bronchial asthma. Try using it as a chest rub or steam inhalation or sprinkled on your pillow to aid healing sleep.

A plant, which like eucalyptus, has a long history of use among the Aborigines of Australia, who crushed the leaves and used them to treat coughs, wounds and skin problems. Although it has a slightly medicinal aroma, it is a useful antiseptic and works particularly well in a steam inhalation.

Its powerful antimicrobial properties, giving it the ability to kill the bacteria that can cause respiratory conditions. It also has anti-inflammatory and immune stimulating properties that strengthen the body and help it fight off infection. During convalescence, adding tea tree to a body massage can aid recovery.

Prized for centuries for its healing qualities, oregano has a broad spectrum antibiotic action and warming, drying properties that may help heal respiratory and other infections. It is traditionally used to treat complaints as diverse as indigestion and diarrhea, rheumatism and stubborn coughs. For coughs it is often recommended as a treatment for clearing sinuses and loosening and thinning phlegm, thus making breathing easier.

Oregano essential oil contains a high level of a substance called carvacrol which has been shown to be an effective antimicrobial agent against many types of germs.

Try adding 5-8 drops of oregano oil to 1-2 tsp of coconut oil to use as a chest rub when you have a cough.

Essential oils are a simple and affordable treatment to soothe the throat, break up mucous and reduce inflammation. [Photo: Bigstock]