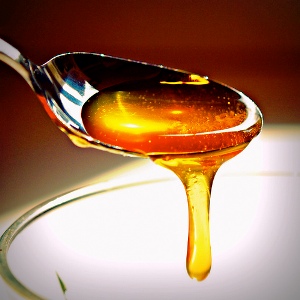 Natural Health News — When your child is suffering from a cough, a spoonful of honey before bed may help to improve sleep and symptoms throughout the night.

That’s good news because so many of the conventional remedies for coughs are ineffective and inappropriate for children.

In a recent Israeli study researchers randomly assigned 300 children (aged 1-5 years) with upper respiratory infections (URIs) either honey or a placebo as a nighttime cough treatment.

The children had been suffering from URIs and coughing at night that had lasted up to seven days.

Half an hour before bedtime the parents gave their children a 10g (2 tsp) dose of either of honey, or a honey-free placebo syrup made from dates. In the honey group three types of honey were used: eucalyptus, citrus or labiatae (mint family) honey.

The parents monitored their children’s cough symptoms as well as how well both they and their children had slept after taking either honey, or the placebo and this information was relayed by telephone and written survey.

Both cough servity and sleep problems improved in both the honey and placebo groups. This is likely to be because in addition to the comfort factor a viscous liquid, sweet liquid also causes salivation which can thin mucus and lubricate the upper airway.

However the scientists noted that improvement in the honey group was greater. Overall honey helped children sleep better as well.

Given the adverse effects of conventional cough treatments Dr. Herman Avner Cohen of Tel Aviv University and his co-authors concluded: “Honey may be a preferable treatment of cough and sleep difficulties associated with childhood upper respiratory infection.”

“In light of this study, honey can be considered an effective and safe treatment of children over one year of age.”

Other studies have also found honey to be an effective cough remedy.

In a 2007 study from Penn State College of Medicine, 105 children were given either buckwheat honey, no treatment, or dextromethorphan (DM), a cough suppressant found in over the counter medicine, before bedtime.

A 2012 meta-analysis and systematic review of previous studies on the subject also came to the conclusion that honey was better for coughs than both no treatment and treatment with over the counter cough suppressant diphenhydramine.

Honey is used by cultures around the world for symptomatic relief from upper respiratory infections.  It is widely studied and there are a number of reasons as to why it may ease cough symptoms.

Honey is a natural antimicrobial – effective against viruses and bacteria. It is very rich in antioxidants and the combination of these qualities may make it effective at fighting URIs.

In the Israeli study the researchers noted that different types of honey may contain different antioxidants – including vitamin C and flavonoids.

In general darker honey tends to have more nutrients. Buckwheat and avocado honey are particularly good choices. If these honeys are not available choose the darkest honey you can find. The anti-microbial properties of Manuka honey are also well proven and this too is a very good choice when you or you child has a cold.

Honey has no adverse effects and can generally be taken as needed. However some practitioners do advise the following guidelines.

Try giving your child ½ teaspoon of honey for every 11 kg (25 lb) of weight. Give your child a dose 4-5 times each day. If your child is having an extreme coughing fit, give her honey during a lull in the coughing.

Some practitioners advise avoiding honey if your child is younger than 1 year old. Microorganisms contained in honey can make babies sick. Additionally, infants do not have the necessary swallowing apparatus to eat honey and can choke on it.

But make sure it is honey!

The only downside to this good news story is that not all honey on sale is honey. Last year a shocking study shocking survey by Food Safety News found that more than 75% of the honey sold in American supermarkets and drug stores wasn’t honey at all but was instead a watered down, reconstituted mish-mash mixed with other cheaper ingredients.

Unless you examine it through a microscope there is no w2ay to tell whether what’s in the pot is real honey – that is honey that contains natural pollen grains – or fake honey that is little more than a sweet syrup.

Commercial honey manufactures claim they filter honey in response to consumer demand for clear honey without any detectable impurities. But removing the pollen also conceals the honey’s origins and allows manufacturers to bottle cheap honey made by bees fed on sugar rather than natural blossom forage.

In 2010 the European Union effectively banned much of the transshipped Chinese honey from their market, but it remains on sale in the US.

For many reasons, and especially if you are using honey medicinally, it is best to buy the best quality honey you can afford and stick to better to stick with certified organic and raw honey which guarantees a higher quality product.